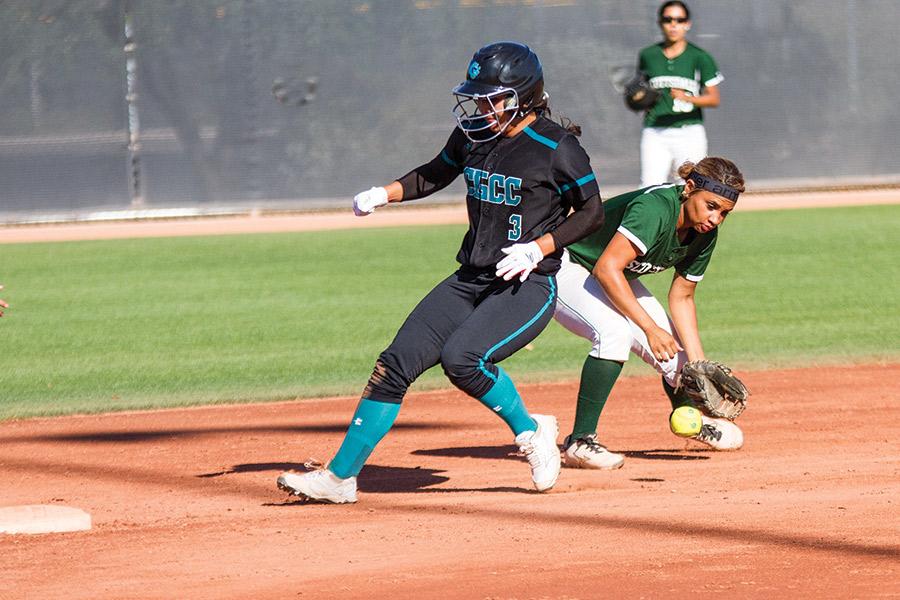 As Coyotes player, Ryland Estrada runs to second, she hits the ball, causing SCC second baseman Rayven Cannon to fumble the ball. This secured Estrada's position and set up her team for a prime scoring opportunity.

For months the Scottsdale area has been hearing ear- piercing smashes, loud booms and bombs dropping in the distance.

The reason? SCC softball has been on an offensive explosion all season and the inflicted wounds on opponents only continue to grow worse as the playoffs approach.

“It’s a major stress reliever knowing you don’t have to press on defense because you know your teammates will step up and get the job done,” Erin Burkhart, catcher and RBI leader, said. “Every game it’s a different person stepping up in hitting or defense, that’s what makes this team so great. It’s not just one person.”

Since September this group of players have been able to bond and grow together as a team, only helping the performance out on the diamond.

Every team goes through its share of head butting and disagreements, but as soon as a group is able to mesh and play well together, magic can happen.

“Our team chemistry is very good,” Alyssa Madrid, outfielder, said. “There are a lot of different personalities on the team and having one thing in common ‘softball’ pulls the team together to create a group of friends who are like sisters.”

For most every team, coming together is the easy part, but having to say goodbye at the end of the season and parting ways is one of the hardest parts of the whole experience.

“Most of the girls on the team I have known for a couple years so saying goodbye to the sophomores who are leaving is going to be difficult,” Burkhart said. “Our team is a family. You are with them almost everyday and you learn to understand each individual so it’s going to be hard saying goodbye.The biggest thing I am going to miss is how well we all connected and came together.”

But with those sad goodbyes, sometimes comes happier beginnings. For Breona Peralta, outfielder, and Taylor Yazzie, pitcher, the best is yet to come.

Both of them will be transferring their softball talents to Grand Canyon University.

“I am very excited to further my softball career as well as my education,” Peralta said. ” I am so excitd to have the opportunity to play and live with Taylor Yazzie next year.”

If one were to look at the final score to a majority of these softball games, often times it looks like the score of a football game.

“The biggest reason (we score so many runs) is probably because we prepare to hit against our oponents the day before in practice,” Mallory Schneid, starting catcher, said. “We scout what tendencies the pitcher has and then use that to our advantage so we are able to drive in more runs each game.”

One of the other main reasons has so much success is because head coach Robert Wagner has some extra help on his staff.

In previous years Wagner was a one-man wrecking crew leading the softball team.

But that all changed this year when he acquired a few assistant coaches to help with drills and execution.

“Last year we only had one coach, which was coach Wagner,” Madrid said. “Therefore it has definitely made a difference having four coaches. As a team we improved on our competitiveness and mental part of the game and growing together as a team.”

With playoffs just around the corner, the Lady ‘Chokes have their eye on the prize with obvious hopes to ultimately hoist that championship trophy for the first time in SCC history.

“We are definitely excited to go to playoffs,” Schneid said. “We are striving to be in the No. 1 seed so that we will be the ones hosting playoffs this year.”