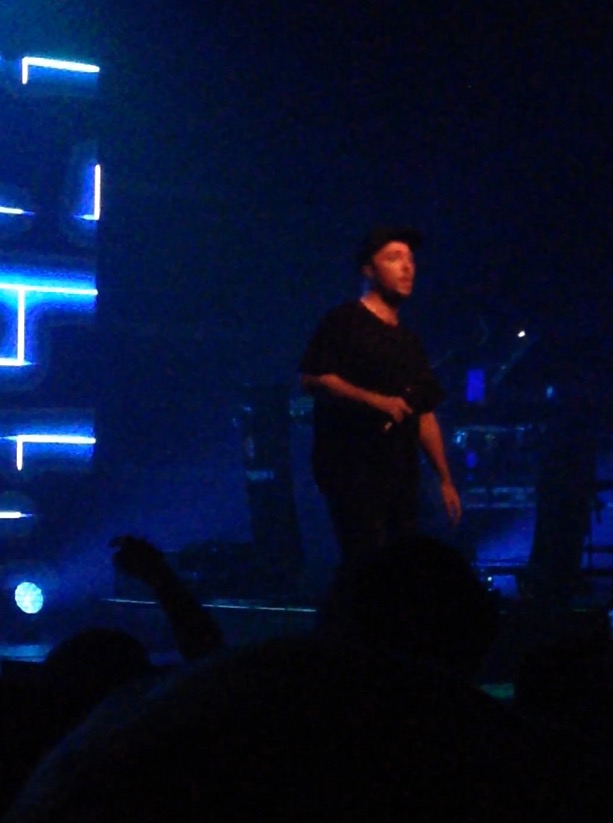 Sampler and backing vocalist Martin Doherty sings "Under the Tide" during Chvrches' abbreviated April 24 tilt at the Marquee Theatre in Tempe.

Scottish trio Chvrches, whose brand of synthpop has garnered international acclaim, ended an April 24 concert at Tempe’s Marquee Theatre after approximately 30 minutes. A pall of concern fell over the Marquee as sampler and backing vocalist Martin Doherty confirmed that all was not well.

“Lauren is really f****** ill,” he announced about a minute into the song “Empty Threat.”

“Empty Threat” is found on the group’s latest album “Every Open Eye,” which peaked at #8 on the Billboard 200 in October and ranked sixth in NME’s Albums of the Year 2015 list. Chvrches had been touring in support of the album, which followed up 2013 release “The Bones of What You Believe.” The trio played two concerts at the Coachella Valley Music and Arts Festival in Indio, Calif. on April 16 and April 23. In a phone interview with the Arizona Republic’s Ed Masley, sampler and occasional guitarist Iain Cook reported no problems regarding the April 16 gig.

“We played just after Run the Jewels so they got the audience hyped up and we had a really great time,” Cook said. “It was kind of a bizarre experience walking out to 30,000 people and playing a gig.”

Sunday night’s gig took place in front of a much smaller crowd at the Marquee and began around 9:30 p.m. After getting through “Never Ending Circles” and “Keep You on My Side,” Mayberry began to sing “Empty Threat” before she abruptly stopped. After Doherty informed the audience of Mayberry’s illness, the trio left the stage for five minutes before returning and playing three songs with Doherty on vocals. He gave passionate performances on “We Sink” – which he said had never been performed live without Mayberry’s vocals – and “Under the Tide,” both from “The Bones of What You Believe.”

Mayberry took the microphone when “Under the Tide” ended and sat down on stage, explaining that if she did not, she would vomit. After she cracked a couple jokes about a CVS one-minute clinic she went to earlier in the day (“I was probably the only person in there without an STD,” she quipped), Mayberry announced the cancellation of the concert. She went on to say that Chvrches would return to Phoenix in October and that tickets for the April 24 show would remain valid. Details will be announced by the band at a later date.

Much to the crowd’s delight, Mayberry was able to perform the hit single “The Mother We Share” prior to show’s end just after 10 p.m. But those expecting a full performance at the Marquee from Chvrches will have to wait until this fall.