Chvrches returns to the scene of the crime

Nearly six months after an illness-shortened concert, the synthpop trio played a makeup date at the Marquee Theatre on Friday 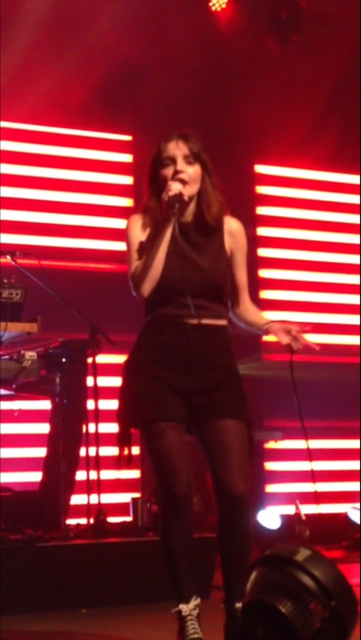 After performing “We Sink” at Tempe’s Marquee Theatre on Thursday night, Chvrches vocalist Lauren Mayberry flashed a sly grin and addressed the sold-out crowd for the first time.

“A return to the scene of the crime,” she said, receiving raucous applause in the process.

Mayberry was referring to the last time Chvrches rolled through Tempe. On April 24, an under-the-weather Mayberry had to leave the Marquee stage, and band mates Iain Cook and Martin Doherty were not far behind her. The Scottish synthpop giants played just a few songs and a shade under 30 minutes before departing, but Mayberry promised a return date prior to the end of the trio’s tour in support of its second album “Every Open Eye.”

Chvrches delivered on Thursday. The group melded material from its first album, “The Bones of What You Believe,” and its followup “Every Open Eye,” released last year. Cook and Doherty’s glistening dual-synthesizer attack combined with Mayberry’s sharp vocals to create irresistible hooks and a stadium-ready sound. Starting with the swirling “Never Ending Circles” and continuing on through the uncompromising sneer of “Playing Dead” and “Gun,” the show went off without a hitch. Doherty, whose intense vocal delivery took center stage in April, ignited the crowd during the two songs he sang: “High Enough to Carry You Over” and “Under the Tide.”

Mayberry’s good humor was also evident, and she made a few references to the abbreviated April show and thanked those in attendance at that show for coming back nearly six months on. At one point, she took a pause in between songs to joke about leaving early to catch a Beyoncé concert on the East Coast on Friday. However, there would be no shortened set on Thursday night, as the trio performed a two song encore: the chilling “Afterglow” and the rousing hit “The Mother We Share.”

The “Every Open Eye” tour has four more dates, finishing up in Washington D.C. on Oct. 18.