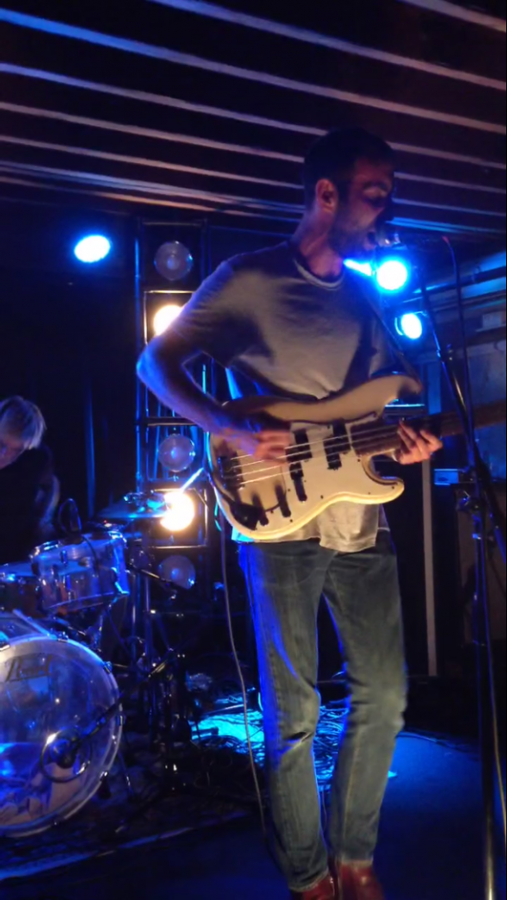 Preoccupations bassist and vocalist Matt Flegel performs "Continental Shelf" during the group's gig at Valley Bar in Phoenix on Oct. 25.

Downtown Phoenix music venue Valley Bar played host to Preoccupations on Tuesday night. The Canadian post-punk act are touring in support of its new album, and the show at tiny Valley Bar was full of emotion and intensity.

Preoccupations originated in Calgary, Alberta, and are comprised of bassist/vocalist Matt Flegel, guitarists Daniel Christiansen and Scott Munro (who occasionally played synthesizers), and drummer Mike Wallace. Formerly known as Viet Cong, the quartet released its second album, “Preoccupations,” on Sept. 21 through Jagjaguwar Records in the United States. Much of the material from “Preoccupations” was played during this concert, and it is material that melds post-punk rave-ups with the abstract, exploratory stylings of groups like Explosions in the Sky. Cuts such as set opener “Anxiety” hissed with nervous energy, and “Monotony” lumbered forward on the wings of soaring guitars and a crushing rhythm. The fast-paced “Zodiac” and “Degraded” were more reminiscent of “Pink Flag”-era Wire.

Flegel’s vocal delivery, a throaty snarl much different from his normal speaking voice, was key to understanding the emotional weight carried by these songs. For example, “Anxiety” begins with the lyrics “With a sense of urgency and unease/Second-guessing just about everything,” and “Memory,” an 11-minute cut on the album but presented here in truncated form, discusses being “overwhelmed and it’s coming from all angles.” The feeling of instability and constant internal grappling pervaded many of the lyrics and were well-articulated by Flegel.

Flegel also proved himself a good bass player, and the group’s musical acumen became evident during performances of songs from “Viet Cong.” The furious “Silhouettes” was driven by Wallace’s forceful drumming and echoed with eerie, Joy Division-esque synthesizers. “March of Progress” started a synth and drum machine-driven soundscape but ended with a call and respond of jangly guitar riffs. Set closer “Death,” an apocalyptic, 16-minute journey, initially centered on a simple riff from Munro before it descended into a chaotic, jarring, stop-start instrumental passage reminiscent of Swans.

“Death” was an appropriate closing argument from Preoccupations, whose laser-sharp focus did not befit the name. The set’s intensity belied its length – just over an hour – and kept the audience enthralled and engaged throughout.