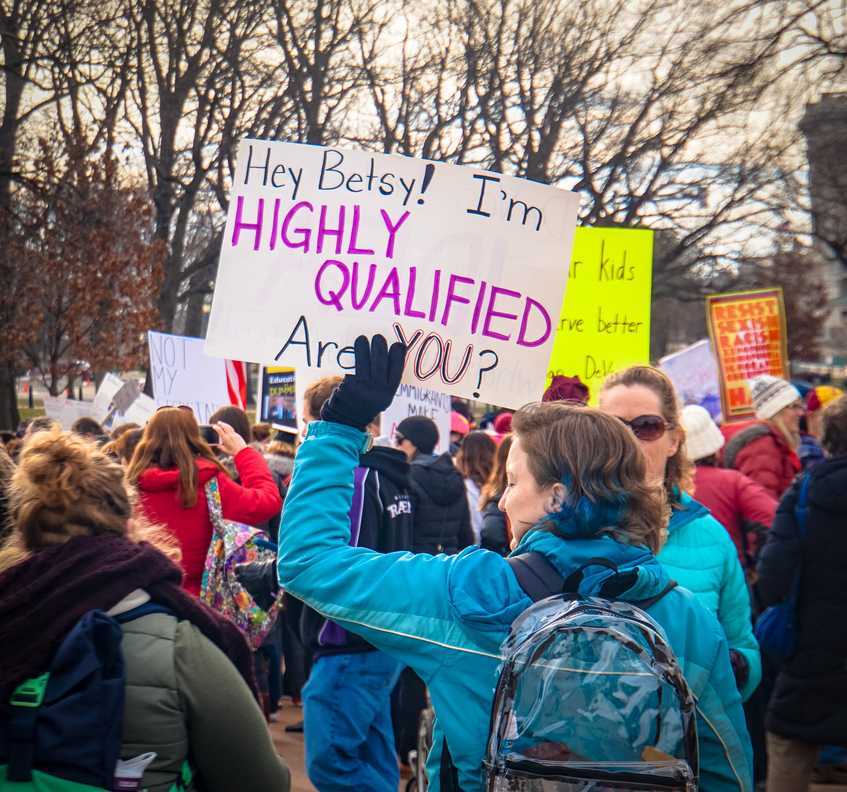 A protester holding up a sign at the Oppose Betsy DeVos Protest in Washington D.C. on Jan. 29, 2017.

The Trump administration’s Secretary of Education, Betsy DeVos has said that public education is “a dead end,” which is potentially ominous news for many families around the United States.

DeVos is a strong supporter of private and charter schools and her lack of experience and knowledge of public education was clearly voiced in her confirmation hearing.  It remains to be seen if DeVos, as some supporters believe, can translate the format of successful private schools to public ones, although it is even unclear if this is her intention.

Sarah Adkins, a former private school teacher feels the support of charter and private schools will drive a divide between children.

“The big thing I noticed with private schools, it’s like segregation between the wealthy and lower or middle class families,” Adkins said.

According to a Dec. 6, 2016 BBC News report, the PISA test score rankings “Top 40” showed Finland’s school system in the top five, and they were previously toward the lower end of the ranking. The US is currently ranked near the bottom among 35 industrialized nations.

Charter schools in Finland are now practically obsolete due to investment in public schools. The system has been completely uprooted with shorter days and different testing practices, which have led to greater success amongst the students when compared to U.S. schools.

Michael Moore, an Academy Award-winning filmmaker and a best selling author, went to Finland during the making of the documentary, Where to Invade Next and the film touched on the fact that there are no “special schools or private schools.”

“The rich parents have to make sure that the public schools are great. And by making the rich kids go to school with everyone else, they grow up with those ‘other kids’ as friends, and when they become wealthy adults, they have to think twice before screwing them over,” Moore said.

Many educators, parents and politicians believe that DeVos is heading in the opposite direction if she intends to place her attention on charter and private schools in an attempt to give more people the opportunity to send their kids somewhere other than a public school. During her confirmation hearing DeVos declined to  provide a “yes” or “no” answer to Sen. Patty Murray (D-Wash.), the top Democrat on the Senate education committee, when asked if she would commit to the statement, “That you will not work to privatize public schools or cut a single penny from public education.”

America’s schools need a change, DeVos seems to plan to change it but by the looks of it, it may not be what educators, students, and parents/guardians want to see.