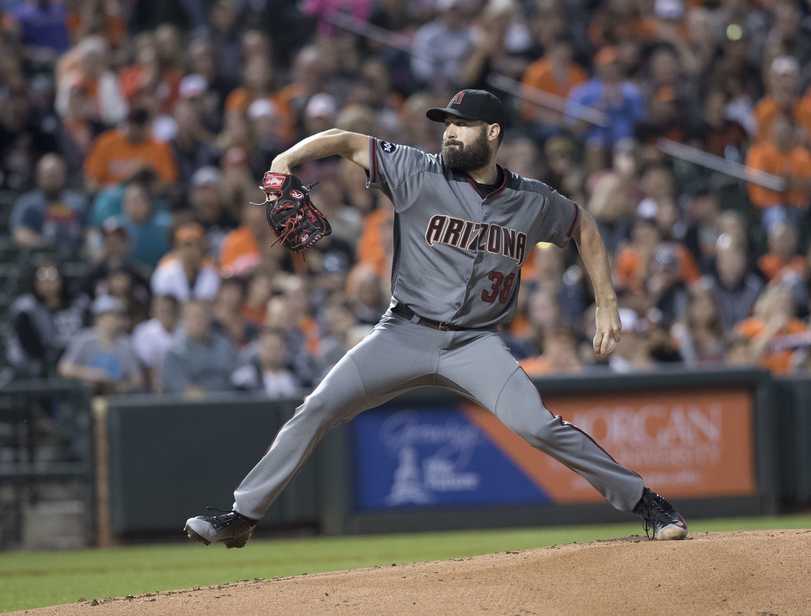 Diamondbacks pitcher Robbie Ray delivers a pitch during a game against the Baltimore Orioles on Sept. 24, 2016. Ray led the Diamondbacks with 218 strikeouts in 2016, a total good for fourth in the National League. However, Ray posted an 8-15 win-loss record and a 4.90 ERA on the season.

The Arizona Diamondbacks wrap up spring training this week, and manager Torey Lovullo named his starting rotation on March 24. After a competitive spring, Lovullo settled on Zack Greinke, Robbie Ray, Patrick Corbin, Taijuan Walker and Shelby Miller as the five pitchers who will get the ball to start the season.

The rotation will be under the microscope in 2017 as it looks to recover from a trying 2016. Last season, Diamondbacks starters posted a 5.19 earned run average – the worst in the National League – and rang up a 5.09 ERA as a team, the worst in baseball. The problems on the mound were a major contributor to last year’s disappointing 69-93 win-loss record. However, there is belief in the clubhouse that this group – fronted by former Cy Young Award winner Greinke and team strikeout leader Ray – can rebound in 2017.

“I think we’re very strong throughout, I think we’re a deep team, deep rotation,” Corbin said. “But it starts with the pitching staff for sure. If we can go out there and do our job, it makes our bullpen better and makes our hitters look better.”

After an All-Star campaign in 2013, Corbin underwent Tommy John surgery on his left elbow and missed all of 2014. The left-hander returned for the second half of the 2015 season but a rough 2016 saw him post a 5.15 ERA and end the season as a reliever.

Corbin said that coming back from his surgery was difficult and a learning experience, but his elbow is healthy now and he is ready to start the season.

“It’s just different trying to bounce back, coming off an injury like that,” Corbin said. “There’s things that you’re not gonna be used to and you’re just trying to fight through it and try to get stronger and better and feel comfortable with your arm.”

Archie Bradley faced a fight of his own this spring as he tried to crack the starting rotation. Bradley instead will start his second full major league season in the bullpen, where he has not made an MLB appearance. While his preference is to start, the 24-year-old focused on the bigger picture.

“I’m happy to be a part of this team,” Bradley said. “I’d love to start and be a starter, but my attitude is ‘any way I can help this team win.'”

The right-hander said he learned a lot about in-game adjustments and consistent pitch location in 2016, when he went 8-9 with a 5.02 ERA. He added a cut fastball to his repertoire this spring in an effort to keep batters off-balance.

“The hitters are obviously really good, they’re the best in the world, but the faster you can make your adjustments and get back to being as consistent as you can be, the better you’re gonna fare,” Bradley said.

Catcher Chris Iannetta is entering his first season with the D-backs. He signed as a free agent in January, and he has seen already that the rotation has the potential to register a marked improvement from 2016.

“Very talented group of guys with some above-average stuff, which always makes our jobs [as catchers] easier,” Iannetta said.

Bradley is optimistic that the bond and hunger the starters share will lead to better results as the 2017 season gets underway.

“I think our rotation could be really strong,” Bradley said. “We have a really tight bond. I know I’m in the bullpen now, but I’ve been working with these starters the last couple years and [with] the addition of Taijuan [Walker], I think we’re going to have a really good rotation. I’m not gonna tell people we’re gonna go out and put up certain numbers, just people need to watch us.”