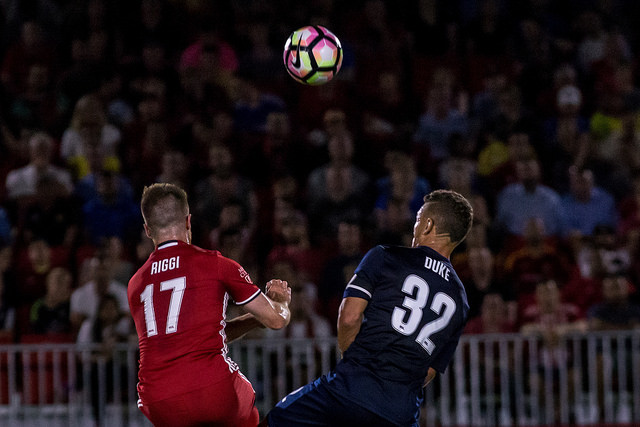 Phoenix Rising's Alessandro Riggi (in red) battles for the ball with Christian Duke of Swope Park Rangers (in blue) during Rising's 4-3 win at Phoenix Rising Soccer Complex on April 23.

On March 16, Phoenix Rising Football Club announced that Thirsty Lion would be the club’s official pub partner for the 2017 season. The Tempe Marketplace gastropub is within walking distance of Phoenix Rising Soccer Complex, and that location will serve as the hangout for Rising supporters and the home for exclusive club-related events.

“Our brand matched their brand, as far as being fun and sports-oriented with the gastropub feel to it,” Thirsty Lion Arizona Events Manager Deanna Rodriguez said.

“The fans are great,” Rodriguez said. “It’s definitely beneficial for us [at Thirsty Lion] as well as for them. The energy’s good, it brings in a fun crowd, and we’re there to provide a before- and after-party pub spot for them.”

Joshua Kahl is the Marketing Director for Concept Entertainment, which owns and oversees all Thirsty Lion locations. He explained that once Phoenix Rising secured the land for the Phoenix Rising Soccer Complex, the club began to sound out potential partners.

“It just seemed like a natural fit for us, with them being right across the 202, about a mile and a half from our Thirsty Lion at Tempe Marketplace,” Kahl said. “We’ve always had a big soccer following for the World Cup, we’ve worked with the Timbers in our Portland location, where we’re from.”

Michael McCoy is Phoenix Rising’s Vice President of Sales and Marketing. He described how the club wanted to honor a long-held soccer tradition and how it found a willing partner.

“In soccer, there’s a tradition, and it’s called ‘March to the Match,’” McCoy said. “And you need to find some place that is relatively close to your facility, and it’s an organic thing that takes place. Many pubs in the Valley already have a soccer team attached to them – mostly overseas teams – but we wanted to have our own pub.”

The convenient location aside, Thirsty Lion’s previous experience in working with a professional soccer club made the pub appealing to Phoenix Rising.

“They’re very familiar [with professional soccer], and they know soccer culture, and they have 8,000 people that march to the match,” McCoy said.

Kahl further explained how the partnership will help both sides from a financial standpoint as well as a cultural standpoint.

“Obviously, just being associated with a new team is great, and hopefully the fans and the team choose us when they go out for dinner or drinks with friends,” Kahl said. “But as far as looking at real numbers, the March to the Match, getting people in before and after the game and doing the away game viewing events. Those kind of things are what we really look at [in terms of] how we can get people into the location.”

McCoy stated that more than 100 fans attended the first away day watch party on April 1, and he expects that figure to be used as a springboard as Rising’s season continues and more events are planned.

“Obviously, we haven’t existed in this market before, it’s a grassroots marketing campaign and it’s how you grow things from the ground up,” McCoy said. “So it’s exciting for us, and the fans seem to love it.”