“Harley Quinn” offers up a tasty drama in new issue 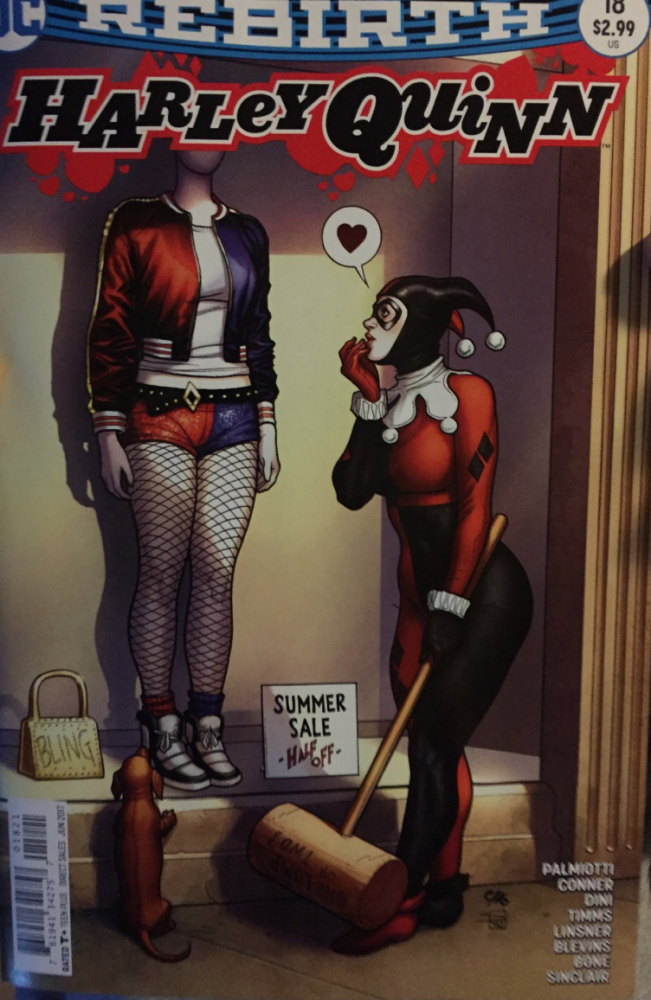 The first few pages start off in Gotham City in 2167, with what appears to be a woman named Devani Kage in a costume that resembles possibly Batwoman. It is interesting to see what exactly the writers have planned for this character, as it shows that she is on a mission to jump one year into the future for something that is unknown to the reader.

We are brought back to Harley Quinn as we see the two people who have kidnapped her drive off with her in the van. The scene changes and we are now brought into the mayor’s office as he is having a conversation with a woman named Madison. Here it is confirmed that she is the reason that the homeless people have been going missing, and the reason is because she has hired cannibals to eat them. Any normal mayor would have an appalled reaction, but this mayor is nothing but thrilled with her “brilliant” idea. He then instructs her to call it quits because it has started to bring attention to them and it is time for them to go home. She gladly follows his instructions.

As the kidnappers of Harley Quinn proceed to beat her up for fighting them, Red Tool is closely chasing after them trying to save her. After Harley Quinn finally gets in a good punch, she gets another dose of chloroform before they can reach their destination. Red Tool loses them, but he has successfully hidden a tracker in Harley Quinn’s suit in a nod to his stalking ways of old. Apparently, Red Tool did this a while ago, but it adds just the right amount of laughter to a tense situation. Old stalker ways aside, Red Tool steps up to be the hero to find his best friend.

Madison invites all the cannibals to a dinner party and informs them that the mayor was going to give them all bonuses for a job well done, and that she has set up transportation to bring them to their next destination. When Madison asks if anyone has any questions one of the cannibals says: “Yeah, who said we’re leaving?”  Before Madison has a chance to rebut, they hear a knock at the door. Red Tool is there, and is not leaving without bringing his friend home.

In the backstory, written by Paul Dini and Jimmy Palmiotti, we find that the Joker has taken Harley Quinn to rob a department store to steal not just money, but fine jewelry and a beautiful fur coat for his beloved. They manage to escape and make their way home with all of their stolen items and even a department store truck. The next night, the Joker turns on the evening news and they are talking about the theft from the department store. The anchor states that they have talked to the Batman, and he has found just the one clue he needs to find the thief: he is holding Harley Quinn’s old coat that she had taken off. Before the Joker and Harley Quinn even have a chance to argue the Batman busts threw their window and ruins their date night.

Madison is supposed to be the boss, but one may wonder how she will fight against her own hired people. What’s more, Red Tool may not be able to save Harley Quinn before the cannibals have a chance to eat her. But most important, just when we thought things got worse for the Joker and Harley Quinn, next we will see how the Batman brings justice.