The Arizona Coyotes rookies took to the ice on Sept. 8 at the Ice Den in Scottsdale before the San Jose Prospect Showcase. 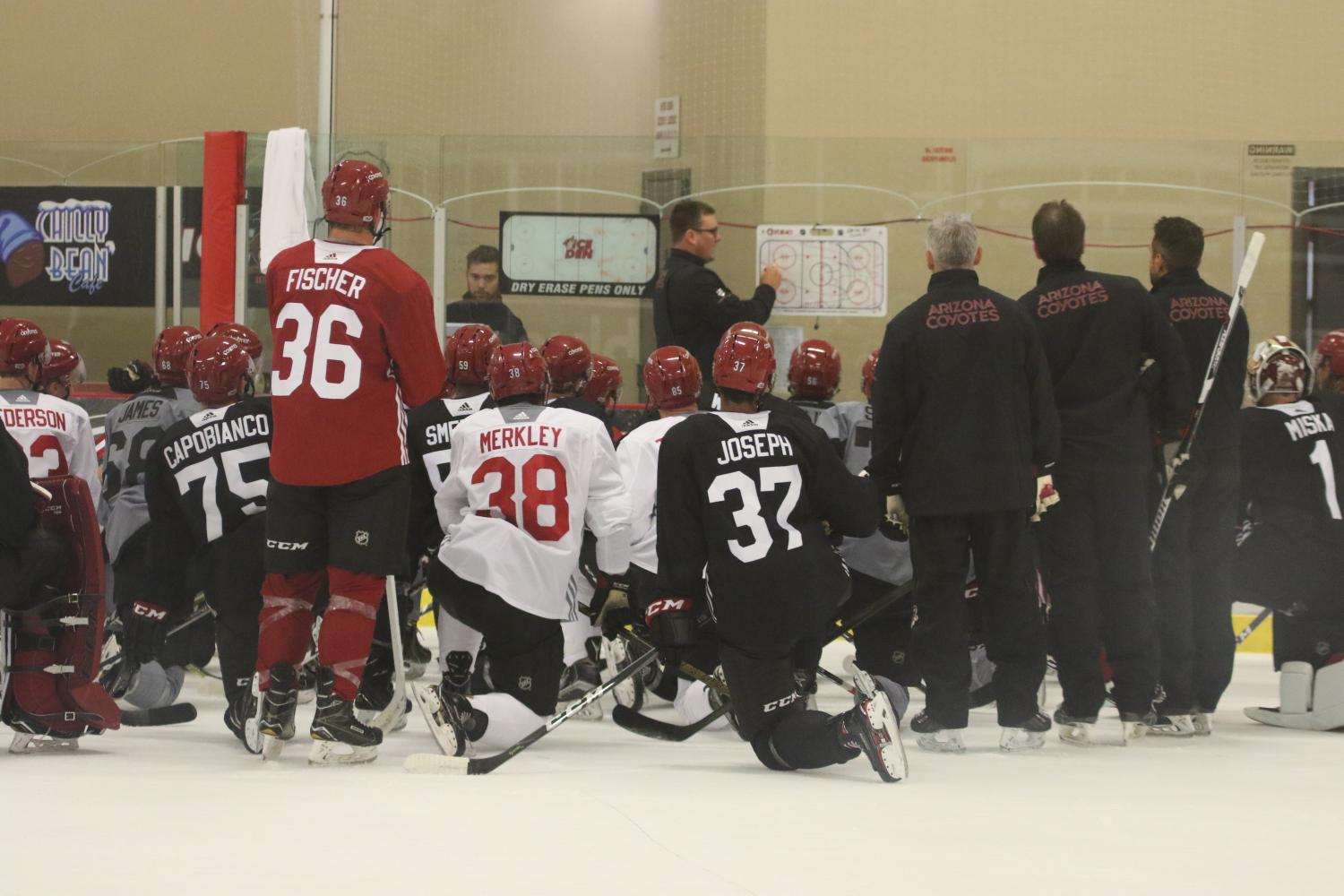 Coyotes rookies take a knee between drills to talk with Head Coach Mike Van Ryn of the Tucson Roadrunners on Sept. 8

The Arizona Coyotes rookies experienced a key difference this year when they came to camp with a new head coach for the NHL as well as AHL team, and also an opportunity to show their skills in the rookie prospect showcase.

With having only two days of training camp before heading off to San Jose, the players were eager to skate against opposing teams.

“It should be more fun, I guess,” defender Dysin Mayo told Northeast Valley News after practice on Friday. “You get to see a few more teams, more players. It’s not as repetitive as the last couple of years. I learned a lot [last year], things didn’t go my way. I want to be a full-time player this year on Tucson and play every game. Maybe get a chance at the NHL Level.”

This also means injuries mount up when the Coyotes play the Kings in those games. Brendan Perlini had his hand broken in 2014 with the Coyotes and right wing Nick Merkley had a collarbone injury during one of the games in 2015.

“I think there is obviously a rivalry there, even in rookie camp,” Nick Merkley said about the Los Angeles Kings games.

“I think it’s nice to get a bit of a different taste from the other teams, and we got three games this time,” Merkley said. “More to show your stuff, and show what you’ve done over the summer.”

Merkley has never had a full training camp with the Coyotes due to injuries and/or recovery. His first season, as mentioned above, ended prematurely after a game against the Kings where he suffered a collarbone injury, which was followed by a traumatic knee injury while with the Kelowna Rockets of the Western Hockey League in February of 2016.

“I think I got off to a rough start [In Kelowna] because of the injury,” Merkley said.

“The doctor told me even right after the surgery, you probably won’t be fully 100 percent ‘til a year later. I’m just coming into the year this year and I’m excited. It was hard coming back off that but I feel pretty good now,” Merkley said.

Saturday nights game did not end the way the team had planned having lost to the Anaheim Ducks squad 4-1, the lone Coyotes goal coming from Merkley with 17.2 seconds left in the first period. On Monday he continued to impress with the overtime winning goal against the Colorado Avalanche, with the final score of 4-3 (OT). The Coyotes lost

to the San Jose Sharks on the last day of the Prospect Showcase, Tuesday Sept. 12 with the final score of 5-3.

The wins and losses of the showcase don’t matter in the long run, it’s about showing the new coaching staff what they are capable of on the ice. All of the rookies are vying for an opening night roster spot on the Arizona Coyotes or with the Tucson Roadrunners.