Walsh has seen U2, 24 times, Tuesday evening will make 25 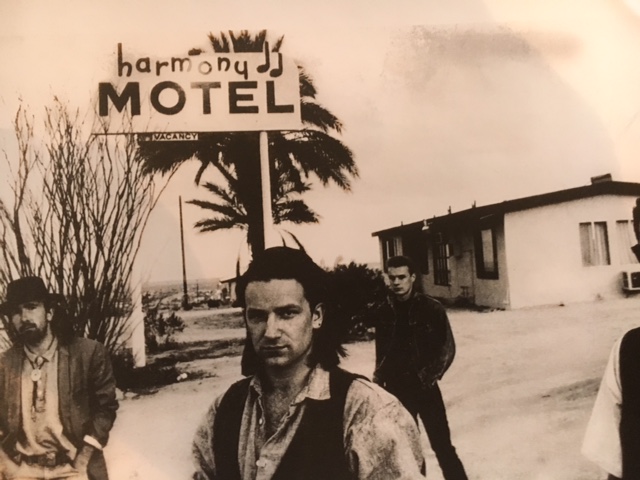 U2 in front of Harmony Motel/ Joshua Tree Album

You may have seen Todd Walsh on Fox Sports Arizona covering the Coyotes or the Diamondbacks at some point over these last 17 years.

But Tuesday night, Walsh won’t be on the sidelines at Petco Park in San Diego covering the Diamondbacks and their quest for a post-season appearance.

He’s taking the night off.

He will, however, find himself at University of Phoenix Stadium, but not for a football game.

He will be there to see U2.

Walsh, a former afternoon drive co- host at the Valley rock station, 93.3 KDKB, has spent many years on air rummaging through the memories of songs, albums, concerts, interviews and moments.

With the advent of social media platforms, it’s now easier to chart his fascination and admiration of the likes of Pearl Jam, The Tragically Hip, The Call, and the iconic Irish rockers from Dublin.

“They touched my soul when I needed them most, probably when I first left home in the summer of ’83, driving solo across the country-leaving New York and landing in the desert southwest. And they never let go.”

“I really don’t know why, but I do know that their music remains one of the most important emotional investments I’ve ever made,” Walsh said. “They had me at ‘I Will Follow.”

Walsh feels their music is like no other. The band’s unique sound moved him from the moment he first heard Bono’s voice and The Edge’s heart piercing guitar, working forever in concert.

But it’s also the lyrics of U2 that run deep. As any music fan can probably attest, songs may find you in layers and sometimes over the course of many years.

Walsh describes a time when he asked about a line in a song and a friend, a U2 novice, informed him that the words were taken “Right out of the Book of Psalms.”

That gave him great pause to wonder, but Walsh believes that U2 has less to do with any kind of message of religion but everything to do with the value of all human beings.

“I love this band unconditionally and if they want to make a stand, I will always listen because I trust their instincts. The rest is up to us.”

Walsh saw his first U2 concert in the spring of 1985 at the old Compton Terrace.

“They have been a driving force of the sound track of my young and now adult life and I’m glad,” Walsh said.  “I know I am not alone!”

Walsh will likely be enjoying the concert in Glendale on the floor along with the masses on Tuesday night, assembling like so many others, more memories to store and more moments to cherish.

He recently took an iPhone tour of some of the vestiges of U2’s first runs through the state with the dawn of the Joshua Tree album and tour.  These classic Arizona/Joshua Tree artifacts literally take you back through time

Walsh witnessed three concerts earlier in the Joshua Tree Thirtieth Anniversary Tour in Seattle, Santa Clara and LA.  Arizona was a late addition to this leg of their run.

As for that old Yucca plant finally returning to the desert,  “Maybe it found what it was looking for,” Walsh said.