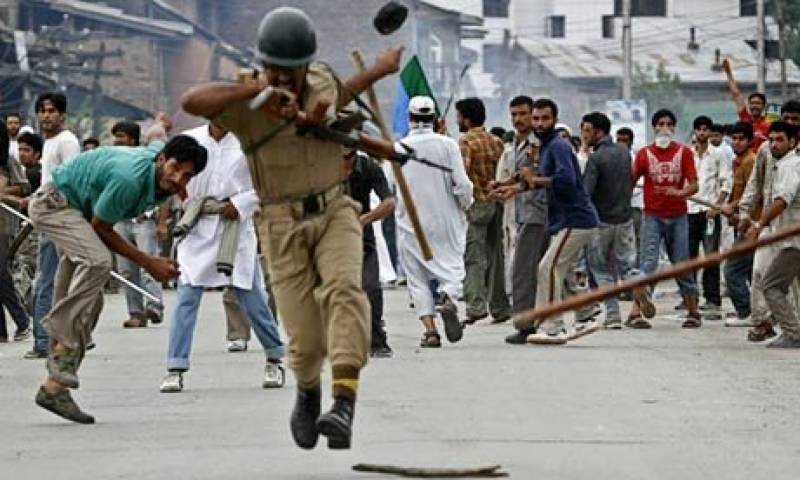 In occupied Kashmir, thousands of people defying curfew and other restrictions.

There has been instability in Kashmir for decades. It is in fact considered as one of most long standing conflict-held region around the world. Kashmir region has been in conflict between India and Pakistan since their separation in 1947.

Generally, Kashmir is a Muslim dominant state with a small number of population compared to other Indian states. India controls 60% of Kashmir whereas Pakistan has control over 30% and the rest 10% is occupied by China since 1962.

Pakistan claims Kashmir as their region because Pakistan believes the majority of the people living in Kashmir are Muslims and the partition of Kashmir should have been handed to them in 1947. Whereas India claims Kashmir to be their region of land due to the believes of Maharaja’s who played the role of kings before the Independence.

Tension increases highly between the two nations due to geopolitical interest of two nations. What has been happening in Kashmir brings into question the democratic values of both Pakistan and India. Kashmir is often faced with brutalities from security forces of both countries. The recent incident that drew global attention was the atrocities committed by Indian army.

On July 8, 2016, the killing of a 22-year old charismatic separatist, Burhan Wani, by Indian security forces sparked Kashmiris. With the demand of independent Kashmir, Wani created a social platform that brought together thousands of freedom loving youths. Upon the incident, government imposed curfew restricting access to basic communication and banning publication of newspaper for days.

This kind of instability is not new to the region. According to a leading Pakistani national daily news site Dawn. An article titled “Cooling Down Kashmir,” shared what this incident could possibly lead to.

“Wani’s killing may well have set into motion an action-reaction cycle that could take Kashmir back to the carnage of 1987. Set off by protests against the rigging of Kashmiri elections by far-off Delhi, India’s massive over-reaction had sparked off an insurgency that lasted into the early 2000s and resulted in the deaths of nearly 90,000 civilians, militants, police, and soldiers.”

What is often disturbing is Kashmiri youths growing up with a sense of animosity against India and Pakistan, which often encourages militancy.  It is indeed disturbing that India’s Armed forces special power act allow the army to arrest, shoot to kill, and/or occupy or destroy properties of the Kashmiri people. A Kashmiri writer and activist, Imran Sheikh, told Northeast Valley News about what is one of the things stopping Kashmiri people from receiving freedom

“AFSPA ( Armed Forces Special Power Act) is another controversial law which is often an obstacle to the delivery of justice to Kashmiri people,” Sheikh said.

The situation has always been tumultuous for long. But most Kashmiri people have long been aspiring to achieve independence to have a free and prosperous life just as the way people from both India and Pakistan do. Kashmir needs international attention to find a way to the lasting solution to the conflict.