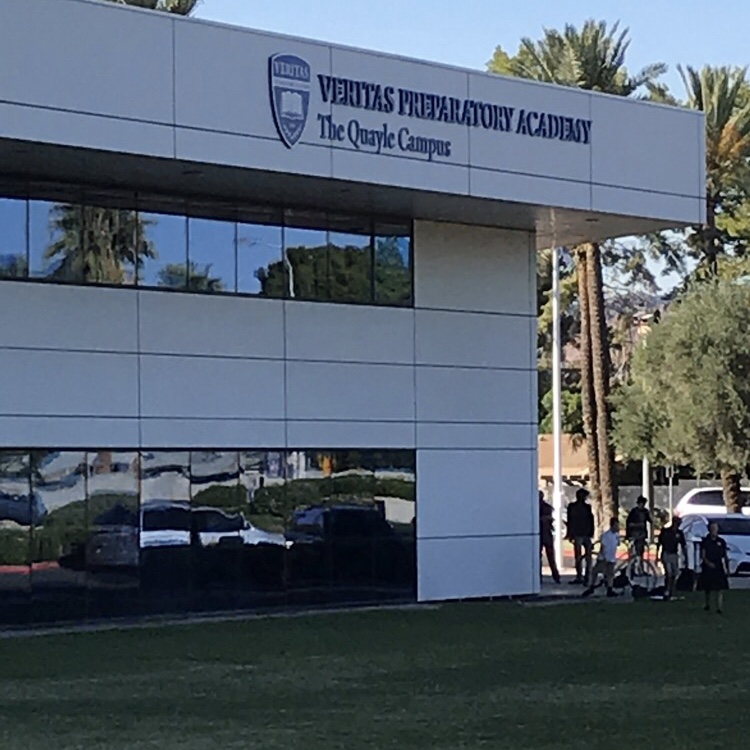 Veritas Preparatory Academy's Quayle Campus is located at 56th Street and Thomas Road in the Arcadia neighborhood of Phoenix. The school was founded in 2002.

Enacted in June 2016 — one month after President Barack Obama’s administration provided guidance on how schools should protect the rights of transgender students — Great Hearts’ Biological Sex and Gender policy states that students must adhere to the uniform code designated by the sex on their birth certificate and use the restroom corresponding to their gender at birth.

The policy, issued by Great Hearts’ 17-member Board of Directors, further stipulates that its schools will offer “private, sex-neutral facilities” to students who do not wish to use the bathroom as recorded on their birth certificate. The policy in full can be found on pages 14 and 15 of the Scottsdale Preparatory Academy Family Handbook.

Attempts to contact the Board of Directors were unsuccessful, but Great Hearts acknowledged the demonstration and the controversy in an emailed statement to Northeast Valley News.

“Over the past year, we have engaged in multiple discussions with a variety of community members and organizations regarding our Policy on Privacy and Accommodation, from parents to students to faculty and staff along with advocacy groups, city and state leaders, and experts in the legal and medical fields,” the statement said. “Those discussions have been respectful and immensely valuable, and have included voices from many perspectives.”

Still, parents, alumni and transgender rights activists continue to insist this policy is harmful and antithetical to the “Truth, Goodness and Beauty” philosophy espoused by the publicly-funded Great Hearts Academies, which educates approximately 15,800 students across 28 schools in Arizona and Texas.

“Basically, the policy is written to say ‘you don’t matter, you’re not as important as the other kids,’” Great Hearts Academies parent Sonja Stone said.

Stone’s transgender son, Jude, graduated last year from Scottsdale Prep. Jude Stone now is a musical theater major at the University of Oregon, but his mother recalled how deeply this policy impacted him in high school.

“They [Scottsdale Prep] offered him a single-occupant bathroom at the back of the school that was very inconvenient to his classes, and it had a broken lock…it was never fixed.”

Hannah Duncan graduated from Veritas Prep in 2011. She first learned about Great Hearts’ transgender student policy in spring of this year and immediately started planning ways to combat it — including building a community of those affiliated with Great Hearts now or in the past.

“In May, we sent a letter to the Board of Directors asking them to repeal the policy,” Duncan said. “It was signed by over 200 alums [of Great Hearts].”

Duncan said the Board has refused to discuss the policy, and the only conversation she has had about it with Great Hearts leadership was one casual lunch meeting which included Great Hearts Secretary & Treasurer Daniel Scoggin and Chief Innovation Officer Erik Twist.

“It was really strange [the lunch meeting] considering we wanted to talk about something that was quintessentially official,” Duncan said. “They listened to what we had to say, but they didn’t make any promises to repeal the policy and they didn’t give us meeting minutes from any of the board meetings that discussed it — which is also strange because it’s a publicly-funded school [system].”

In response, Duncan and other alums gathered at Great Hearts’ fundraising gala in September to hold a Socratic roundtable discussing the harm caused by the policy. They came to the gala with selections from Aristotle, Plato and Virgil to back up their claims — the ancient philosophers form a heavy part of Great Hearts’ liberal arts curriculum.

“Erik Twist came out at the gala to accept a letter that had been signed by people who had previously gone to Great Hearts schools and now were doctors, saying that this policy is not only discriminatory but is actually physically harmful to students,” Duncan said. “I followed up with him [Twist] over the course of two weeks. He then decided that ‘further conversation isn’t necessary.’”

Ryan Greene is a 2012 Veritas graduate. He returned to Arizona from an out-of-state institution to join Duncan’s efforts in overturning what he called a “discriminatory policy” and expressed dismay at the Board’s alleged unwillingness to discuss the policy.

“They [the Board of Directors] say that they’ve talked to ‘medical experts, ‘legal experts,’ various experts,” Greene said. “But I haven’t heard what those things are [that led to the policy’s implementation].

“There’s been no open conversation from the full Board to involve members of the community,” Greene said. “To me, it hasn’t felt very transparent.”

Duncan agrees that the process has been far from above-board and said she would continue organizing demonstrations for the time being.

“Even if Great Hearts isn’t ready for transparency, democracy and full participation of its school community, we are,” Duncan said.

“And we won’t go away until they repeal the policy.”

Jeremy Beren is a freelance reporter and a student at Arizona State University’s Walter Cronkite School of Journalism and Mass Communication. He is a former journalism student at Scottsdale Community College. Email him with tips or comments: jberen@asu.edu.