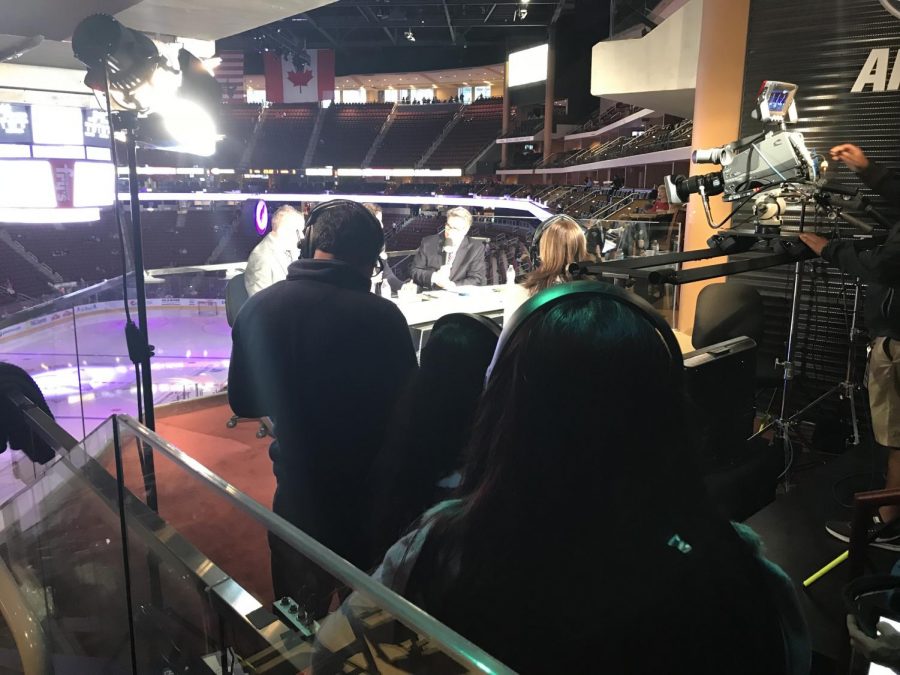 Three journalism students from Scottsdale Community College’s Digital Media Student News Production had never seen a hockey game-(much less hockey in the desert) but they were given the opportunity to experience hockey in a unique way for their first game.

Paige Vannareth, Puja Mahato and Muhammed Javed were chosen to attend an Arizona Coyotes game, Nov. 4 at the Gila River arena in Glendale, because of their accomplishments as students of journalism.

They attended the game, not as fans, but as media observers and they watched the game while taking in the various media elements from the broadcast balcony, the press box, the radio booth and the post game press room.

Typically these places are reserved for the media and each are special in their own way.

Before the fans file into the arena on a game night, the media collect their respective places with their credentials and head up to the press box.

The SCC students were able to fuel their own passion for a career in either sports or news broadcast and print by visiting the press box and taking in the work that is done on the broadcast set.

Two international students, Puja Mahato of Calcutta, India and Muhammed Javed of Islamabad, Pakistan, had never seen a hockey game and were amazed as they got their first look at the ice from the upper press box at Gila River Arena, the home of the Arizona Coyotes.

Once they found their assigned seats in press row they were introduced to Arizona Coyotes beat writer, Craig Morgan of Arizona Sports followed by a visit to the Coyotes pre-game set where they were invited to listen to the producer and director as the show aired live.

The broadcast team of Matt McConnell and Todd Walsh greeted the students before going live.

To Mahato, who is pursuing a career in broadcasting, the moment was a big one for her.

During first intermission, they were introduced to the Coyotes radio broadcast team, Bob Heethuis and Paul Bissonnette, the radio play-by-play and color commentator respectively for the Coyotes. Bissonette, also known as BizNasty, hit off a conversation about Cricket with both Mahato and Javed-a popular sport in their respective countries.

Halfway through the third period, the students moved downstairs to watch the rest of the game on a quiet set and Walsh, the Coyotes broadcast pre-game host, explained the reasoning behind specific questions that he would likely have for some of the players and the coach…as is the case in professional sports-all the reasoning changed when Carolina scored to tie the game.

Walsh said that a beat reporter must be ready to think on their feet because the game is fluid and even in the last few seconds-everything can change.

After the game, the students were allowed to observe a short press conference with a visibly pleased head coach, Rick Tocchet-after a much needed Coyotes win.

Vannarath said the game of hockey can be a little stressful.

“I loved the shoot out part too. You could feel the anxiety building in the room but the satisfaction of coming back to win was I’m sure, everything for the true die hard fans,” Vannarth said.

“The favorite part of the game for me was the Coyotes win! I want to learn how they [the team] come up with new strategies and play so well,” Mahato said.

Wins are hard to come by right now for the Coyotes, but to brand new fans like the journalism students from SCC, it didn’t seem to matter.