Coyotes, Panik look for fresh start during second half of season 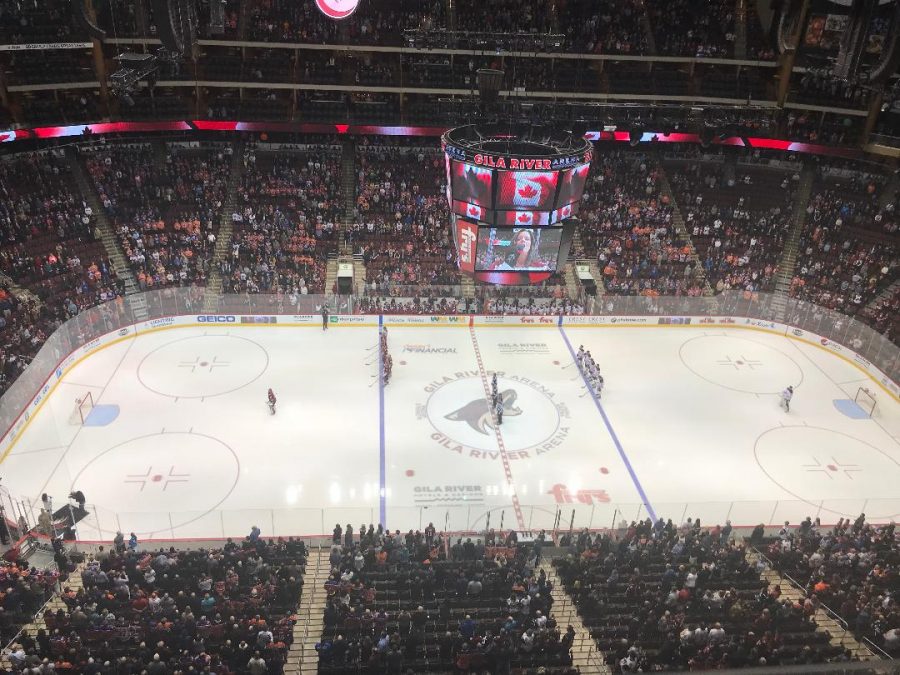 The Coyotes and The Oilers standing for the Canadian National Anthem

The waves of change and new beginnings have hit the Arizona Coyotes, a team struggling to find its own way this season.

The team is already looking to start fresh with the trade of forward Anthony Duclair and defenseman Adam Clendening to the Chicago Blackhawks, in exchange for forward Richard Panik and former Coyote, Laurent Dauphin.  Duclair was in his third year with the team after playing 18 games for the New York Rangers as a rookie.  He requested the trade after reportedly becoming frustrated with the way he was being treated and having been a healthy scratch for ten games this season.

Panik is also looking for a fresh start with a new team.  The 26 year old forward is focusing on his next steps with Arizona after being traded from Chicago, where he had fallen into a scoring slump. Panik made his Coyotes debut on Jan. 12 against the Edmonton Oilers.

This week also came with the announcement that Oliver Ekman-Larsson will be representing the Coyotes in the National Hockey League All-Star Game at Amalie Arena in Tampa, Florida, Jan. 26 through Jan. 28. This will Ekman-Larsson’s second All-Star Game, but his first with the 3-on-3 format which was adopted in 2016.

“I love everything about the Coyotes, so I’m happy to be the guy who goes to the All-Star Game,” Ekman-Larsson said Jan. 10 to Dave Vest of ArizonaCoyotes.com. “It means a lot. I still think I can play better hockey, but at the same time, it means that I’m doing something good and people like what they see.”

Ekman-Larsson has six goals and 13 assists in 44 games with the Coyotes this season.

Some of the issues the Coyotes have been experiencing defensively could be remedied in the second half of the season as Niklas Hjalmarsson returns to the line-up.  This marks the first time that Jakob Chychrun, Ekman-Larsson and Hjalmarsson, the team’s three best defenders, will be in the line-up together since Hjalmarsson was injured Nov. 28 against the Edmonton Oilers.

This season began with great potential.  But early, major injuries to key players, caused the team to start slowly.  Now, with the rookie talent starting to find their own way and the defenders all healthy, the second half of the season could be smoother than the first.  Perhaps making their 10-27-6 record a distant memory at the end of the season.

At the end of the line, there is a light, his name is Rasmus Dahlin.

Dahlin is the projected first overall pick of 2018 NHL draft.  He has been playing in the Swedish Hockey League for Frölunda in Gothenburg, Sweden.  He spoke with Patrik Bexell of SB Nation about the start of his season and his development.  Playing with professionals for the last two seasons has helped his game.

If the ping pong balls fall the Coyotes way during the April draft, there could be even more reason for optimism next season.