After the accident, Elizabeth Quiroga’s story 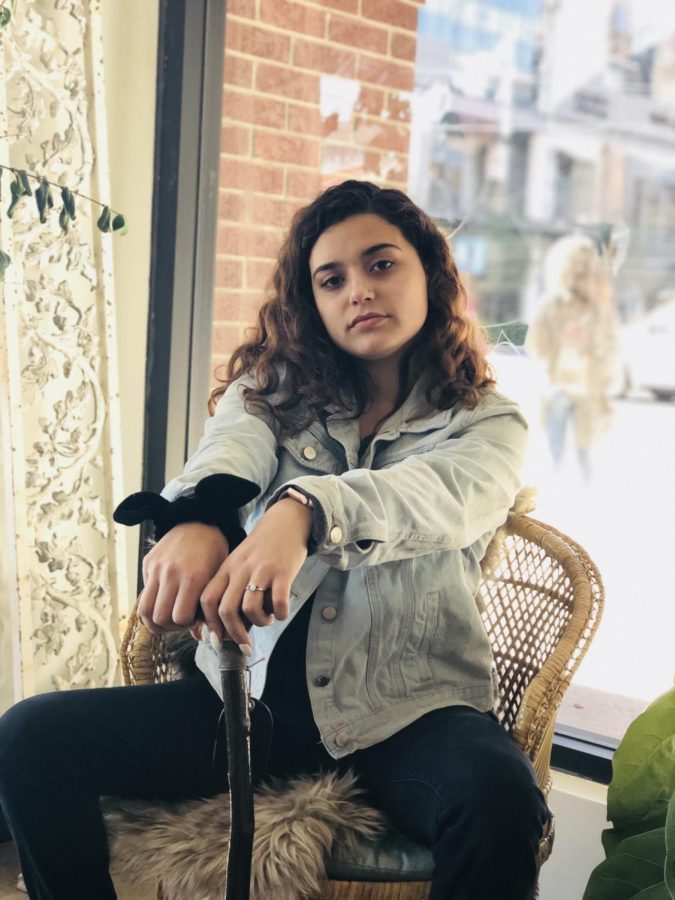 Elizabeth Quiroga posing with her cane.

Disclaimer: The reporter of this story, Jada Welch, is a friend of Elizabeth Quiroga.

On April 18 2016, 18 year-old Elizabeth Quiroga, a Chandler Gilbert Community College student was a passenger in a vehicle that flipped seven times and ejected Quiroga from the backseat.

Quiroga shared her story of survival with Northeast Valley News.

Now 20 years-old, she recalls how she overcame trauma and the resulting disability and remembers nearly every second leading up to the accident.

“I remember immediately denying it. It wasn’t happening, it wasn’t real. It couldn’t happen to me, there was no way,” Quiroga said. “But once I realized the pain was real, the events were real, my feelings were real–I immediately prayed to God. Just asking him to keep me safe and alive, to allow me walk again and live a normal life.”

Quiroga’s faith played a significant role in her recovery and she spoke of her relationship with God at the time as a comforting presence, reassuring her she wasn’t going to die that first night in the hospital–she was going to be okay.

“I look at it [the accident] as a huge slap in the face from God saying, ‘hey, get your life back together what are you doing here?’ You’re not doing what you’re supposed to be,” Quiroga said.

Quiroga knew the path ahead was not going to be easy.

Denial and resentment were among the feelings she experienced as she became more aware of her injuries and learned of her disability.

“I have a spinal cord injury at level L3, and it’s incomplete,” Quiroga said. “L3 is kind of where your lower extremities–nerves, come into play. So I have a lot of numbness and weakness in both my legs, and tingling in my legs that’s kind of constant in there from broken nerves or misplaced nerves, or whatever.”

Quiroga’s disability causes chronic pain as well as loss of sensitivity in multiple areas of her body.

“It’s so funny when I hear people say that they’ve broken their ribs or their scapula and they’re like ‘oh it’s so painful’ and I’m like, I didn’t even realize–I didn’t even know that those were broken unless somebody told me,” Quiroga said through her laughter. “It’s funny what the mind does with pain–it really focuses on whatever’s hurting the most.”

Beyond the pain was fear–fear that Quiroga would never be able to walk again.

“You had little to no chance of being able to walk [the doctor told us],” Sam, Quiroga’s sister, said.

“When you were in surgery and the doctor came back–he told us that we wouldn’t be able to know if you could walk until you were out of anesthesia,” Sam said.

Quiroga was placed in a medically induced coma after her first surgery, but the doctors decided to take her out of anesthesia briefly to see if she would be able to wiggle her toes.

The doctors warned that she had a one in ten thousand chance of being able to walk again.

“He didn’t want to get our hopes up, which I mean, it’s probably the best thing to say as a doctor,” Sam said. “He said that it’s not impossible, but it’s not likely.”

Sam recalled that her sister didn’t wiggle her toes in that moment, which terrified their family.

However, shortly after everyone left the room her family was informed that Quiroga had wiggled her toes–but partial paralysis was still a concern as the movement could have been a random impulse. This caused great uncertainty as to what Quiroga’s future would be like.

A team of doctors worked tirelessly, and eventually Quiroga defied all odds and was able to walk again. Among the physicians was a highly experienced traveling spinal surgeon who was at the hospital completely by chance. Quiroga looks at that series of events as going beyond coincidence.

“It was so specific,” Quiroga said.

“That one second I decided to unbuckle my seatbelt–I go out the backseat window that just so happens to be open, in the middle of nowhere, landing on a barbed wire fence. They take me to this hospital where there’s this surgeon who’s like, meant for me, to fix me–because I had been the worst spinal cord injury he had ever seen without paralysis.”

Quiroga is open to sharing her story with others because she is aware her experience is both unique and miraculous and she hopes to be able to help others who may be struggling in a similar way.

“It’s shaped me in such a way that I could never be more thankful for the event to happen in my life,” Quiroga said.

Quiroga and her sister, Sam spoke about the accident with a lighthearted energy, filling tough topics with laughter and the occasional inappropriately funny joke.

“Our family has dark humor,” Quiroga laughed. “You either laugh or you cry–so we decide to laugh.”

Quiroga shared that she is thankful for her disability–for keeping her grounded.

“I could look at all of this negatively. I could think of this thorn in my side [her disability] as just pain, and something that keeps me from my full potential–or I can look at my relationships and feel bad for causing them pain, and sadness, and stress during that time,” Quiroga said.

“But nobody has time for that. It happened. And everybody else wants to move on–I want to move on. I want to take this, and make this a part of me, and I want to make it beautiful.”

Quiroga refuses to let grief bring her down and is committed to pursuing recreational therapy, the passion that was revealed to her after the accident.

“There’s a verse in the Bible, and it says something along the lines of ‘where God has called you is where you need to work,” Quiroga said. “I think God has called me to use this trauma, and help others in similar situations.”

Quiroga describes recreational therapy as a broad field that serves to help people live their lives again after trauma.

“I could be a light in the darkness,” Quiroga said.

“Showing them that they’re going to make it through, and they’ll have a life again. And it will be a better one.”