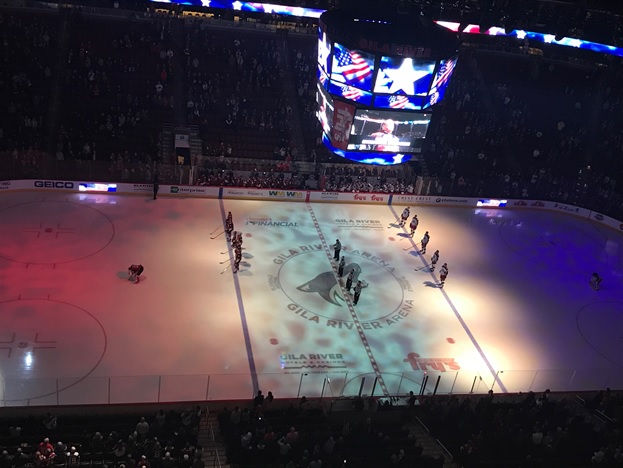 In a scoreless first period that didn’t go the Coyotes way, the Coyotes had a slight advantage with eight shots on goal to the Blue Jackets seven. Oliver Ekman-Larsson also took a big hit in the first, as an example.

At 12:42 of the second period, Antti Raanta made a spectacular save on a shot from Matt Calvert of Columbus. Jakob Chychrun had a good look at the goal with about 10 minutes to go in the second period but just shanked the shot high, hard to tell if the Blue Jackets Goaltender Sergei Bobrovsky got a piece of it. Bobrovsky was on fire as he kept the Coyotes scoreless on 25 SOG through those two periods.

It was announced in the middle of the second period that forward Brad Richardson would not be returning to the game due to an upper-body injury.

A scuffle broke out with a minute left in the second period between Ekman-Larsson and Artemi Panarin which resulted in a two-minute for roughing penalty which would go into the third period.

Niklas Hjalmarson, Coyotes defense-man, was called for tripping which gave the Blue Jackets a 4-on-3 power play. Capitalizing and scoring the first goal of the game for the Blue Jackets at 1:19 was Alexander Wennberg with assists from Zach Werenski and Seth Jones.

Ekman-Larsson and Panarin had just exited the penalty box.

At the start of the third it was announced that Coyotes Jason Demers would not return to the game for the third after suffering an upper-body injury.

After the game, Head Coach Rick Tocchet did not have any updates on their health.

With 12:21 left in the third Brendan Perlini scored an unassisted goal, on the power play, in his 100th career NHL game to tie the game 1-1. This was Perlini’s 14th of the season.

Cam Atkinson scored with 3:03 left in the third to give Columbus a 2-1 lead, Wennberg with his second assist of the game as the Blue Jackets held on to this one to the final score of 2-1.

Tocchet took away a lot from the game.

“I thought we played a good game,” Tocchet said. “We dominated the third, we had a lot of chances. Bobrovsky obviously is one of the top goalies in the league. Then obviously a coverage mistake on that (the game winning goal) with three minutes left, that was a killer. Shouldn’t happen, but sometimes inexperience in those situations bites you.”

“He (Bobrovsky) played really well and made some key saves there.” Raanta said postgame. “I think we played good enough to win this game but the luck wasn’t on our side today, but we still played really well.”

The Coyotes head into the All-Star break 3-2-3 to end the month of January, accruing nine points in their last eight games.