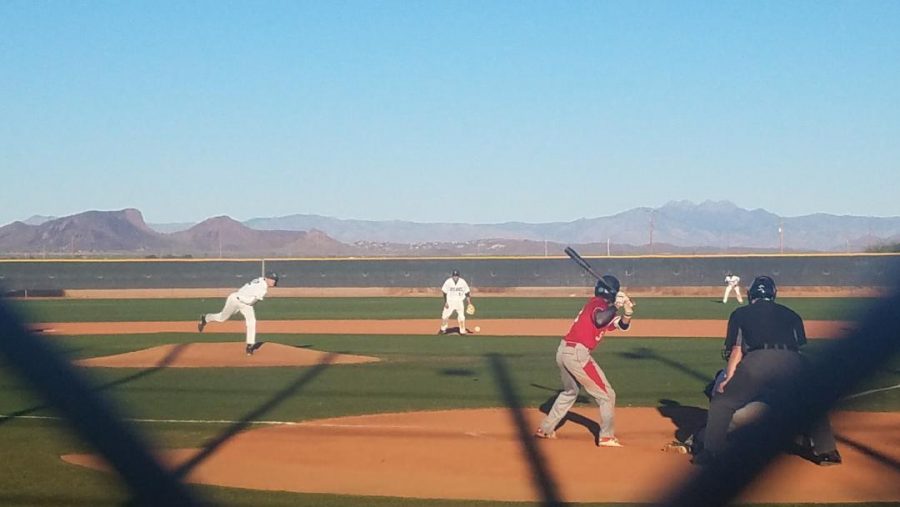 The Artichokes versus the Spartans at SCC home field

The Artichokes started off with a single run home run by freshman catcher Alex Gonzales and kept the Spartans from scoring. It seemed that the Artichokes had the momentum starting the game. But the Spartans fought back in the third and fourth inning and took the lead 3-1.

The Artichokes tied up the game in the fifth inning with a two-run home run hit by freshman infielder Tennison Cantrell. In the sixth, the Artichokes scored another run putting them ahead 4-3.

Top of the ninth, with the Spartans up to bat, they had bases loaded when they laid down a bunt, the runner on third scored. Following that, the Artichokes catcher Alex Gonzales had a pass ball and home was stolen and the Spartans took the lead 5-4.

With runners on second and third, another bunt was laid down, and the Spartans upped the score 6-4. The Artichokes were unable to make a last stand play and score in the bottom of the ninth inning.

Northeast Valley News spoke with Artichoke’s Head Coach Alex Cherney after the game and how the team performed.

This was the Artichokes first home game after being out of state in El Paso, Texas and Southern Idaho for road games and at time of story posted, their record stands at 5-4. Cherney is hopeful the team will find their rhythm when conference games arrive.

“We start the conference season this weekend, so the guys are excited to get into that and get into the routine,” Cherney said.

The Artichokes next home games are against Pima Community College with the first game starting at 12:00 p.m. on Feb. 10.