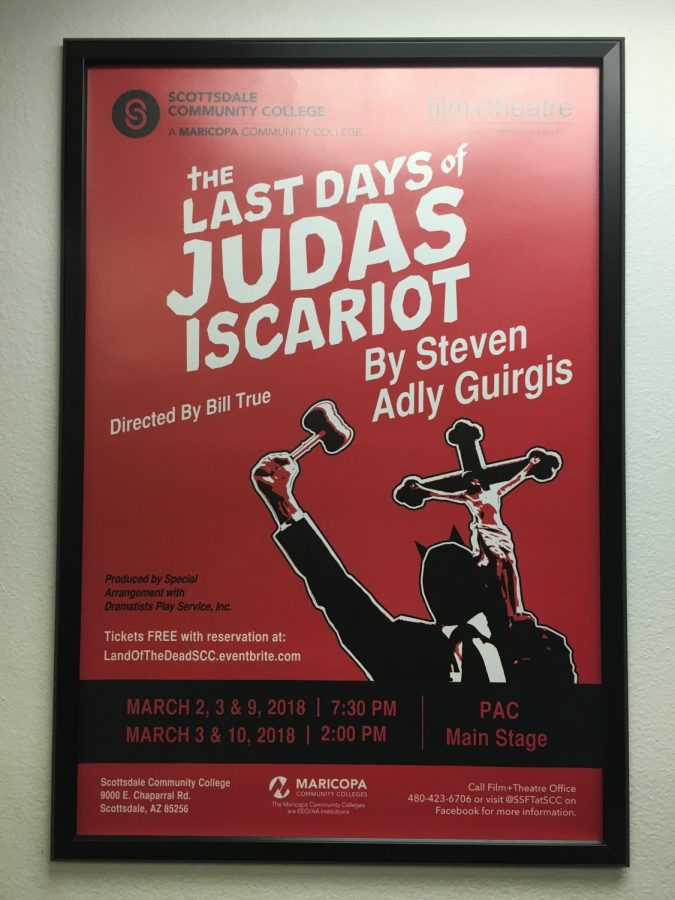 Poster of the play inside the SCC Theater Building

In celebrating 13 years since it was first staged at the Off-Broadway at The Public Theatre in 2005, Scottsdale Community College’s Film and Theater Program will be presenting “The Last Days of Judas Iscariot” on select days. On March 2-3 and March 9 at 7:30 pm. As well as March 3 and March 10 at 2 pm.

All performances will be held at the Performing Arts Center at SCC.

Originally written by the award-winning playwright, Stephen Adly Guirgis, “The Last Days of Judas Iscariot” is a play set in a courtroom focusing on Judas Iscariot, the apostle who revealed Jesus Christ to the authorities at the time.

Often seen as non-traditional or controversial to some people, in this trial Judas faces the possibility of going to hell.

Speaking to Northeast Valley News, Bill True, the head of screenwriting program at SCC’s film school said this play was chosen because of its profound storyline.

“I had the opportunity over time to see a couple of different plays and productions of this [nature] that were vastly different,” True said. “The ‘beating heart’ of this story is so touching, beautiful and profound and that has nothing to do with religion.”

While the play’s title may sound controversial when referenced to the Bible, True said the play is non-conventional.

“It strips away the religious standpoint about the story of Judas Iscariot and allows you to form a new opinion about it,” True said.

In the play, Judas Iscariot, the main character, deals with despair and redemption. This theme carries throughout the play.

Maddie Natoli, a theatre student at SCC, without giving too much away, described the play’s setting as unique and Prince-themed.