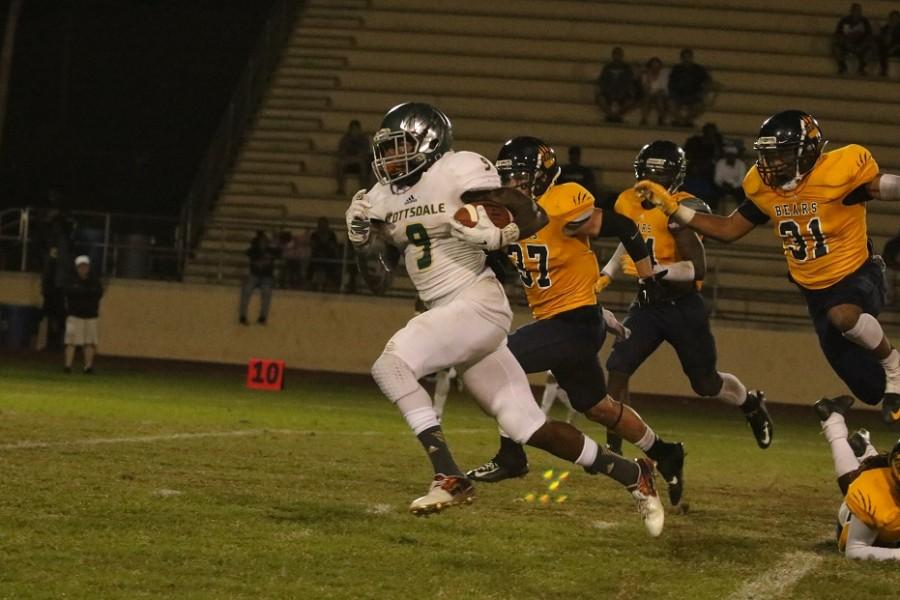 Artichoke wide reciever Shaquan Curenton catches a pass from quarterback Tyler Bruggman and runs for a touchdown during the Artichokes' 59-21 win over Phoenix College in the 2015 season.

On Feb. 6, Scottsdale Community College students were alerted through an email from SCC President, Dr. Jan Gehler, that the football program would be eliminated following the 2018 season.

At the same time, students at Glendale, Mesa and Phoenix College’s were informed that their football programs would be eliminated as well.  This means that one of the largest community college systems in the country will no longer offer scholarships nor the opportunity to play football in, for many, a financially accessible academic system.

According to Matt Hasson, District Director of Communications for Maricopa Community Colleges, the decision to cancel the football programs was based largely on recommendations given by the Maricopa Priorities Athletic Task Force in May 2017.

At a student forum held on the campus of SCC on Feb. 8, Dr. Gehler cited budgetary constraints caused by decreasing enrollment and an absence of funding from the state of Arizona as other factors in removing football.  In the email mentioned above, Dr. Gehler alluded to “several hundred thousand dollars of unbudgeted expenses” that would be necessary to keep SCC’s program operating.

In an effort to offer the most accurate information possible, Northeast Valley News has requested the records of both the Maricopa Priorities Task Force report and documentation of the forecasted expenses from SCC.  The contents of these reports will be reviewed and discussed in an upcoming story at nevalleynews.org.

There is an online petition circulating to save the football programs at the four Maricopa Community Colleges.