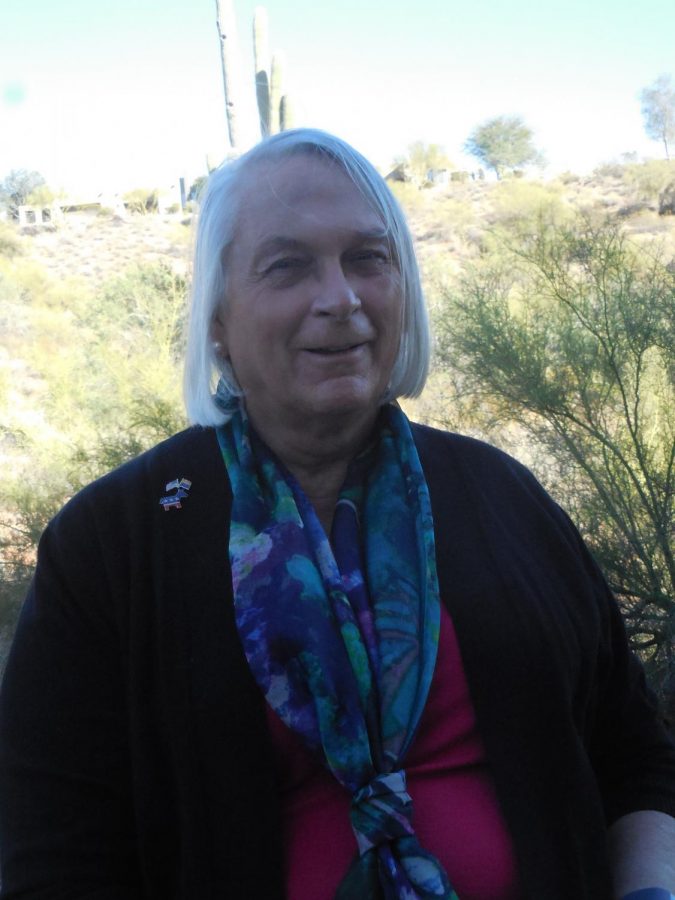 Arizona State Senate candidate Daria Lohman is running for a seat few would have given her a chance to win in the past.

“I think we’ve had an awakening in this state, and that’s why I think I have a shot in a strong-red LD-23,” Lohman said. “I think I have a real shot at being able to get elected. People are paying more attention now than they used to.”

Lohman, a self-styled progressive, is running to represent Legislative District 23, which encompasses Scottsdale and Fountain Hills. It may be a Republican stronghold, but Lohman believes her platform and increased Democratic activism — reflected by a significant boost in precinct committee people — could give her a chance to flip LD-23 from red to blue.

If she defeats Republican Michelle Ugenti-Rita this November, Lohman would make history as Arizona’s first transgender elected official. She could become the second trans person to both be elected and serve in a state legislature, joining Virginia’s Danica Roem.

“This is probably the best chance we’ve had [to go blue] in many years,” Lohman said. “This is the most people that I’ve seen getting involved since I’ve been here. Even in 2008, we did not have near the activism we have now.”

“The Arizona Republican Party expects to hold all its seats in LD-23. Our Party has a very engaged group in that Legislative District. They get out the vote, and have a strong record of helping elect Republicans.”

Barack Obama’s election to the presidency in 2008 was a historic moment in American politics, but Donald Trump’s election eight years later spearheaded an outpour of outrage that continues to this day — the current president sports a 41 percent approval rating. After 15 years of activism and deliberation, it was Trump’s surprise win which inspired Lohman to run for Arizona State Senate.

“I’ve finally come around to realize that actually it was probably good that Hillary [Clinton] lost, because people are starting to realize that ‘hey, our rights could go away.'”

Moreover, Lohman felt a responsibility to run as an American citizen. A six-year Army veteran and former cybersecurity engineer who grew up on DoD bases around the country, Lohman double-majored in math and applied physics, finally receiving her B.S. from Weber State when she was 35. She recounted how her upbringing and past experiences continue to be relevant  today.

“Whenever I went to a movie growing up as a kid on the bases, we had to stand for the flag and the national anthem before the movie played,” Lohman said. “I’m a very patriotic person. I served in Vietnam, I served six years in the army, I’ve lived all over this country and I’ve lived in other countries. I believe I have the background and understanding necessary to move this country forward. I can’t not run.”

Lohman is campaigning on three key issues that she believes follow each other logically. With two grandchildren aged six and eight, she is concerned with the status of public education in Arizona, which U.S. News and World Report has ranked in the nation’s bottom 10.

“Our public education system is a fundamental issue,” Lohman said. “I have a hard time understanding why public education is a partisan political issue, but it is. Same with healthcare. A healthcare company executive making several million dollars a year because he throws people off plans that are costing him too much? That’s wrong. We’re going down these bad roads.”

Infrastructure joins public education and fully-expanded affordable healthcare — inspired by the easily-arranged trips she made as a child to clinics on DoD bases — on Lohman’s list of critical issues. She explained how the three key items on her agenda constitute an actionable plan.

“Arizona should be the research and development capital for solar energy in the world. [If] we have the school system, we have the resources, what’s going on in this state that’s stopping that?”

Lohman insists that the raw tools are there for Arizona to prosper, but that the state’s financial resources must be allocated differently.

“We are not spending money on the things that’s going to bring in new business,” Lohman said. “As I’ve said — we build up our schools and our infrastructure, businesses start looking at Arizona and they say ‘yes! That’s where I wanna go.'”

Though she has faced accusations from within her party of espousing identity politics, Lohman does not mind much, as she understands that Arizonans and Americans at large suffer from varying forms of inequality.

“If everybody else has all these rights and you’re [not] in that group that’s getting those rights, there’s something wrong,” Lohman said. “It really is all about identity politics. Every citizen deserves equal rights.”

Lohman speaks from experience as a trans woman. She was anxious when she moved to Arizona from Silicon Valley in 2000, but the support of her two daughters emboldened and reinforced her commitment to representing all citizens.

“All people are important regardless of race, creed, color, sexual orientation, gender identity,” Lohman said. “I don’t have to talk about my own personal situation because I want to know what you care about.”

It is that kind of rhetoric that Lohman says can give her a chance to turn the tables in a blood-red legislative district.

“Instead of taking our country backward, I want to take our country forward into a better life for all of us,” Lohman said. “I believe that every citizen is important — we’re all people. That’s who I want to represent at the State Senate.”