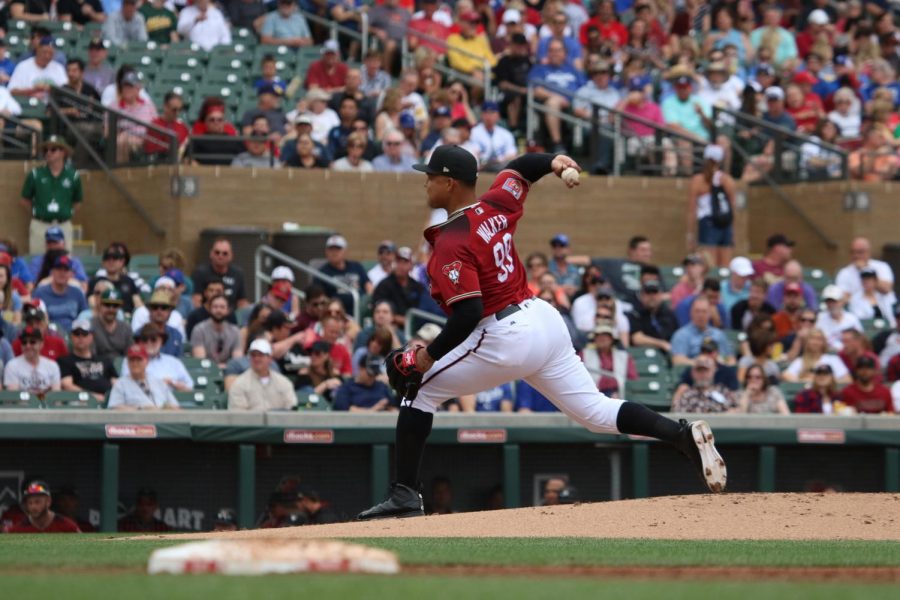 Pitcher Taijuan Walker in action during the Diamondbacks victory over the Kansas City Royals on Mar.10 10-3.

The D-Backs also won the first of the two matches, 7-2 at Surprise Stadium, home of the Royals during spring training.

In the first two innings the D-Backs iwere shut out 0-3 until the bottom of the second, where catcher Jeff Mathis hit a two-run single on the ground to left field and allowed both outfielder Yasmany Tomás and infielder Ketel Marte to score.

Outfielder A.J Pollock hit a ground ball into fielder’s choice and set up Mathis to tie the game 3-3.

“Everything’s been going well, except for today,” Walker said. “It’s still spring training and it’s my third time out. Five days from now ill go out there and make sure in the bullpen I’m throwing a lot of fastballs.”

The D-backs took the lead in the bottom of the third with Marte hitting a ground rule double to third and allowing Tomás to score 4-3.

During the bottom of the fifth, the D-Backs widened their margin to 7-3 with infielder Kristopher Negrón hitting a two run double and a single to center by David Peralta.

Before the beginning of the sixth inning, many of the starters were removed and backup players were brought in.

The D-Backs went on to score another three runs bringing the final score of the game 10-3.

With a strong performance throughout the game, the D-Back’s review their options for the final roster.

One player who stood out was new addition from Tampa Bay Rays, right fielder Steven Souza Jr. who played a noteworthy defensive game.

“I think David and A.J are really good out there and with Jarrod (Dyson) coming in, they’re very good at communicating,” Souza said. “A.J and I have developed a friendship and so when you become friends, you can really trust each other out there so its’ going to be fun.”