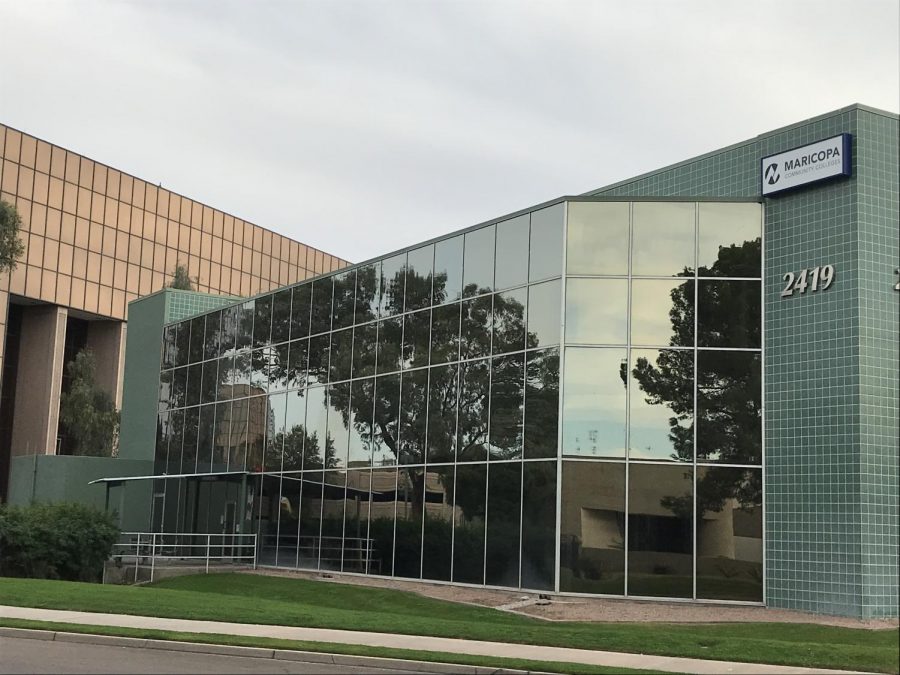 A letter released on March 9 to Maricopa Community Colleges faculty via individual emails and on behalf of the faculty association, alerts faculty of approved legal action.

The Maricopa Faculty Executive Council (FEC) is the governing board of the Maricopa Community Colleges Faculty Association.

“The FEC has approved legal action against the district. As this action occurs, more detailed updates will be provided to you via home emails. We are fighting for a restoration of the RFP and Meet and Confer.”

After the February 27, four-member Maricopa County Community Colleges District (MCCCD) board majority offered a “yes” vote against the three-member “no” vote–Maricopa Community Colleges ended a four-decade policy of faculty input and governance by eliminating Meet and Confer and Residential Faculty Policy (RFP).

The vote also directed that the MCCCD Chancellor, Marie Harper-Marinick, would be responsible for providing a process for the next step in faculty contracts, faculty input, and faculty policy.

MCCCD faculty anticipated a quick response from Harper-Marinick after the February 27 vote.

On March 5, in an open letter to faculty, MCCCD Chancellor, Harper-Marinick released the following message…

As you are aware, the Governing Board voted on Tuesday of last week to adopt a resolution that impacts how faculty and administration engage in dialogue for the purpose of faculty policy development. This resolution ended immediately the process of Meet and Confer and directs me to propose a “process for policy development that recognizes the Governing Board as the final approval authority” and to “oversee the creation of a new Residential Faculty Policy Manual.”

While such changes can feel overwhelming and challenging to us, I remain committed to working together with faculty and administrators to identify and implement transparent and collaborative solutions for the benefit of our students and the communities we serve.

Faculty Executive Council (FEC) leaders and I already have met to discuss the best way forward. This administration recognizes and supports the exceptional talent of our faculty and the difference each one makes in the lives of our students. We will preserve faculty involvement in policy development and any other decisions impacting the work we do across the system.  I will convene an ad-hoc committee during March and April for the purpose of determining an inclusive and fair process for faculty policy development to be recommended to the Board in May.  The ad-hoc group will include residential faculty members from each college; the Provost; and representatives from the council of Vice Presidents for Academic Affairs, College Presidents, and HR.  In addition, I have asked each college president to work directly with their college faculty senates to determine how best to continue college collaboration in a manner that provides the least disruption to students and the learning environment.

Let me be clear: we value and respect our faculty. I have been an advocate and strong public supporter of faculty and my position has not changed. We are fully committed to remaining strong as we continue our good work.

Separate sources close to either the MCCCD board or administration have requested anonymity from nevalleynews.org for fear of retaliation and job loss.

Sources allege that a letter from Harper-Marinick indicating her long-standing support of faculty is nowhere near the same as an in-place policy of faculty governance, input and recourse — no matter how well-intentioned.

“The faculty has been stripped of any recourse, we have no input, absolutely no say,” alleges one source. What they [the MCCCD board] did–through a four-member intentioned vote was effectively, illegal.”

In an interview with nevalleynews.org, Faculty Association President, Mike Mitchell, explains that while Harper-Marinick is publicly stating her support of faculty input–her response falls short of meaningful action because it provides no recourse for faculty.

“We expected the Chancellor to oppose the board vote, and we are deeply disappointed in her actions. Leadership is not tested when things are going well; it requires bold action when things are difficult,” Mitchell said.

“The process the Governing Board terminated was a genuine participatory governance process that insured meaningful faculty participation. It had specific roles and responsibilities that were developed over decades. It ensured student degrees and job certifications were of a quality that empowered students to move on competitively to universities and into the workforce.  At its core, it had elected faculty representatives with generations of combined experience who understood the complex nature of a system as large and varied as MCCCD. It included proscribed protections for faculty so they could defend academically-based curriculum and ensure students the highest quality instruction without fear of interference or retaliation.  It was the same professional and democratic process that made the US college and university system the envy of the world,” Mitchell said.

Mitchell explained what many consider to be the vital component of faculty participation in light of the recent board vote to eliminate Meet and Confer and specifically the role of the FEC as the governing board of Maricopa Community Colleges Faculty.

“The FEC is the democratically elected representative body for the vast majority of the professional faculty of Maricopa’s colleges. The FEC has worked for 50 years collaboratively with previous chancellors, governing boards and college administrations to continuously improve the quality of the education we provide,” Mitchell said.

Mitchell says the job of the FEC is to provide protection for faculty so they can defend academically-based curriculum and ensure students the highest quality instruction without fear of interference or retaliation.

“Over 1000 of the full-time residential faculty in the Maricopa Community Colleges make up the association; that is 75% of the full-time faculty. A slim majority of the current governing board is seeking to silence the professional and democratic voice of the faculty,” Mitchell said. “It was the same professional and democratic process that made the US college and university system the envy of the world.”

He describes the action of the board as “reckless” and in violation of the law.

Northeast Valley News contacted MCCCD Chancellor Harper-Marinick for a response to the letter indicating the approved legal action on the part of the FEC.  No response was provided to nevalleynews.org.

When asked if Mitchell feared that the decision to take legal action could fragment the faculty in light of Harper-Marinick’s open letter in support of faculty inclusion—he emphasized both the need and the urgency behind the move.

“We take positions based on the long-term viability of our college system and the welfare of our students. We are committed to defending excellence in education for our students, the business community, and the professional faculty who have dedicated their lives to the enterprise of public higher education.  The magnitude of the Governing Board’s decision, taken after only one week of notice, can only be described as reckless.  It was done, in our opinion, in violation of the law.  As a matter of principle, we had to act.  Our members understand and appreciate that we are standing up for them and the students they serve.  We believe that many of the college administrators do as well, but only the faculty association appears to be willing to do something about it,” Mitchell said.

Marie Harper-Marinick was named interim chancellor of Maricopa Community Colleges in March of 2016.

According to a May 2016 article in The Arizona Republic, Harper-Marinick, was selected to the full appointment of chancellor after the 2016 governing board voted 5-2 at a special meeting to remove the “interim” title two months later in May.

Her 2016 appointment drew some criticism according to the same article when some board members, including Tracy Livingston, one of the four board members who recently voted “yes” in the February 27 vote to eliminate the Meet and Confer and Residential Faculty Policy—when Livingston, along with board member Jean McGrath alleged that the search process to appoint Harper-Marinick “was not set up to give all candidates a fair opportunity.”  In the special meeting, some board members also said the process was not “thorough or fair.”

Alfredo Gutierrez was the 2016 MCCCD Governing Board President.

Gutierrez defended the 2016 search process for chancellor and Arizona State University President, Michael Crow, who led the 11-member search committee for a chancellor was quoted in the Arizona Republic article with regard to the criticism from some of the board members.

The search process was “very well run,” Crow said in the article and asserted that the search committee was never influenced by any board member nor governed by a timeline.

In the final vote, Livingston, as well as four other board members including then Governing-board President, Gutierrez, members, Dana Saar, Doyle Burke and Johanna Haver voted to approve the Harper-Marinick appointment while board members McGrath and John Heep voted “no.”

A palatable “guardedness” present among faculty over Harper-Marinick role

One source revealed to nevalleynews.org that the anxiety level among faculty is extremely high despite the Harper-Marinick message stating her support of faculty.

“There’s lots of speculation. In general, we are still unified although some cracks and fissures are appearing as some rumors begin to swirl and questions surface about whether or not Harper-Marinick may have been supportive of the recent board move to end Meet and Confer and RFP at some level.”

For another faculty source, it all boils down to a couple of possibilities—Harper-Marinick will negotiate aggressively on behalf of faculty and then present to the board—or Harper-Marinick is hand selecting an AD Hoc committee that will attempt to rewrite the RFP within six months and without the full democratic process of faculty input.

A democratic process was the key component to Mitchell’s assertion that the MCCCD board-vote to remove Meet and Confer and RFP essentially gave the faculty association no other recourse than to take legal action and that Harper-Marinick let the faculty down when she did not publicly condemn the vote.

“What is at issue here is the principle of sound and legal governance.  The Governing Board’s decision was made contrary to law and long-standing academic principles. No elected body, particularly one governing a valued educational institution like the Maricopa Community Colleges, should operate with disregard to those things. We feel it is necessary to act, so we are,” Mitchell said.

“It’s easy to say you support the principle of faculty inclusion, but it’s difficult to actually do it in the face of political and professional pressure.  The Chancellor could have opposed this action; she could have publicly spoken against it.  But she remained conspicuously silent on the Board’s action until it was over,” Mitchell said.

“History will be her final judge.”