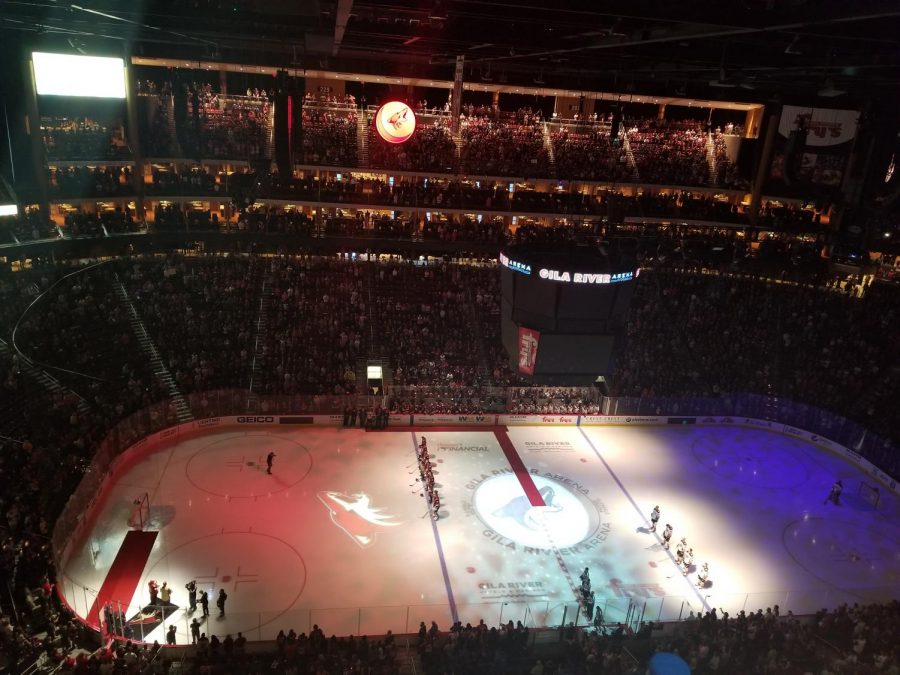 The Coyotes and the Ducks standing for the National Anthem

The mood was somber at the start of the game.

The Coyotes held a moment of silence for the Humboldt Broncos, the junior team whose bus was struck by a semi on a way to a game on the evening of April 6. Currently 15 passengers have succumbed to their injuries, 14 are still recovering. This accident shook the hockey world, many teams donating money to the families through private donations or 50/50 raffles.

During the end of the season celebrations, the team announced their yearly awards. This year’s Three Stars Award, Leading Scorer and Most Valuable Player was Clayton Keller, who in his rookie season has put up 23 goals, 42 assists for 65 points. Keller is second among NHL rookies in points with 65.

He was a star of the game 17 times, seven times as first start. The Man Of The Year Award went to Oliver Ekman-Larsson for his contributions to the community. The fan voted Hardest Working Player award went to Nick Cousins.

With the Ducks playing for seeding, they came out hard and fast, striking first on the power play at 10:54 of the first period, just seven seconds into the advantage. Scoring his 24 goal of the season was Adam Henrique assisted by Corey Perry and Rickard Rakell.

Coyotes forward Nick Cousins had a chance on a breakaway, but the Ducks goaltender Ryan Miller was able to stop it.

In the second period, the pace stayed the same. Corey Perry of the Ducks and Brad Richardson of the Coyotes got into a spirited fight, after many scrums between the two teams. Both teams were having their chances but only the Ducks were able to find the back of the net, Rickard Rakell from Ryan Getzlaf and Josh Manson.

With 3.4 seconds left, the Ducks defenceman Hampus Lindholm scored an empty netter, as the Coyotes attempted to score with the man advantage.

The third period, Ryan Miller continued to hold down the net, even with point blank chances from Clayton Keller, Dylan Strome and Brendan Perlini.

“For me it’s just the process, getting there. (We) got better in October, there were some good positive things. We have a lot of work to do. Everybody’s got to get better.” Head Coach Rick Tocchet said after the final game.

The Coyotes end with a record of 29 wins, 41 loses and 12 overtime/shootout losses. With the extension of Antti Raanta the team continues to find its way back to winning.