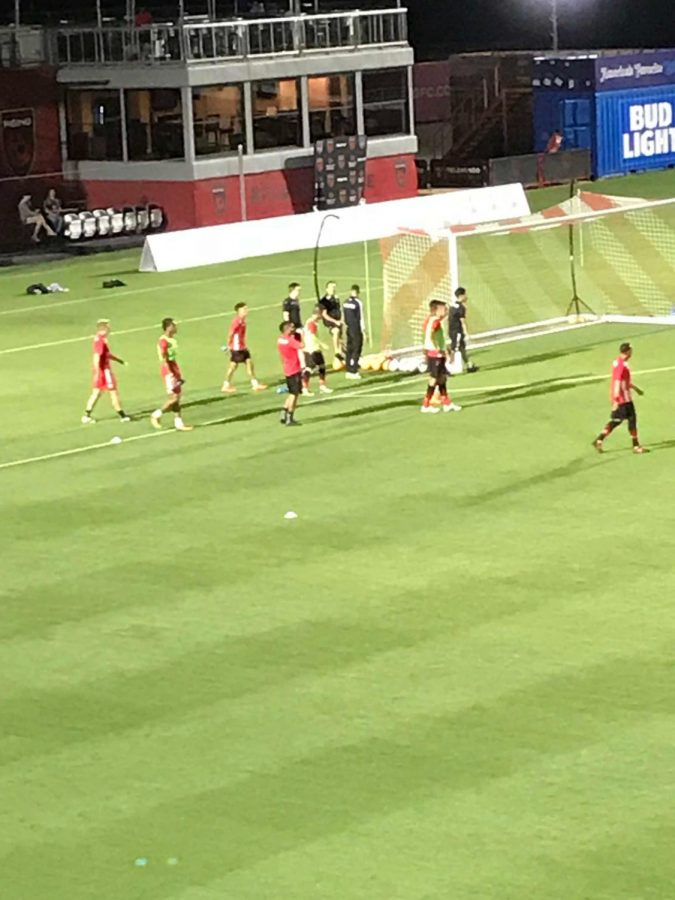 Phoenix Rising and Fresno FC played out a 1-1 draw on Saturday, April 28.

Phoenix Rising needed some late, late heroics from their bench to secure a 1-1 draw against Fresno FC at Phoenix Rising Soccer Complex on Saturday night.

Rising (3-3-1) were reduced to 10 men following a first half red card and fell behind from an early second half goal. Coach Patrice Carteron’s men defended well enough to keep Fresno (2-5-1) at bay and the result in the balance before substitute Alessandro Riggi cannoned a 90th minute equalizer into the top of the net.

“I’m very happy about this point,” Carteron said. “All of us wanted to do better, but when you are losing like this, 1-0 with two minutes to play and you have fantastic energy to come back and to score one goal, it’s fantastic.”

The first half was played at a fast, frenetic pace. Rising took up possession early and often, trying to pin back a tall, sturdy Fresno defense. Solomon Asante nearly opened the scoring on 12 minutes as he burst forward on a counterattack, but Foxes goalkeeper Kyle Reynish made an excellent save to deny him. This would prove to be one of the few clear chances for either side in the first half despite the game’s open nature and yards of space through the middle.

The biggest moment in the first half was not a goal, but a straight red card doled out to Rising’s Amadou Dia. The center back cut down Noah Verhoeven near the touchline, and the Fresno winger writhed in pain as he rolled past the boundary. After a moment of deliberation, the referee decided that Rising were to play with 10 men for the remainder of the contest.

“Going down a man so early, one thing that came into our minds was ‘we have to work harder, got to be more focused,’” captain Jason Johnson said. “It doesn’t matter [whether there are] nine, eight, seven guys on the field, we’re gonna do our best until the 90 minutes comes.”

In spite of the man advantage, Fresno struggled to craft big chances against an organized, determined Rising defense. The Foxes forced Carl Woszczynski into just one first half save as the teams entered the dressed room locked in a stalemate.

Said stalemate would not last long, however. Fresno forward Jemal Johnson bagged his third goal of the season in the 46th minute to nudge the visitors in front. This forced Rising to push up the pitch in search of a response — Carteron’s men soon had the lion’s share of possession. While they made Reynish uncomfortable at times, the team lacked the spark to truly turn around the match.

It turned out Riggi was that spark. Carteron threw on the Canadian midfielder less than 15 minutes from time and he turned around a match that was petering out fast.

“I’ve been watching Solo [Solomon Asante] for a while now, that guy has eyes behind his back,” Riggi said. “He didn’t even see me…I just said ‘Solo, into space!’ in French and it was a great connection. He just [passed] it, I was there and I just took care of business.”

Goals are always rewarding for the players who score them, but this one was extra-special for Riggi, who has battled illness and injury in the early going this season.

“In football, anything can happen,” Riggi said. “You’ve just gotta be ready for any moment. There were some battles, some mental challenges, but I fought through them and was happy to help out the team.”

Rising will need that help as they kick off a long stretch of games in May. Their next match is on Friday, May 4, at home against LA Galaxy II.