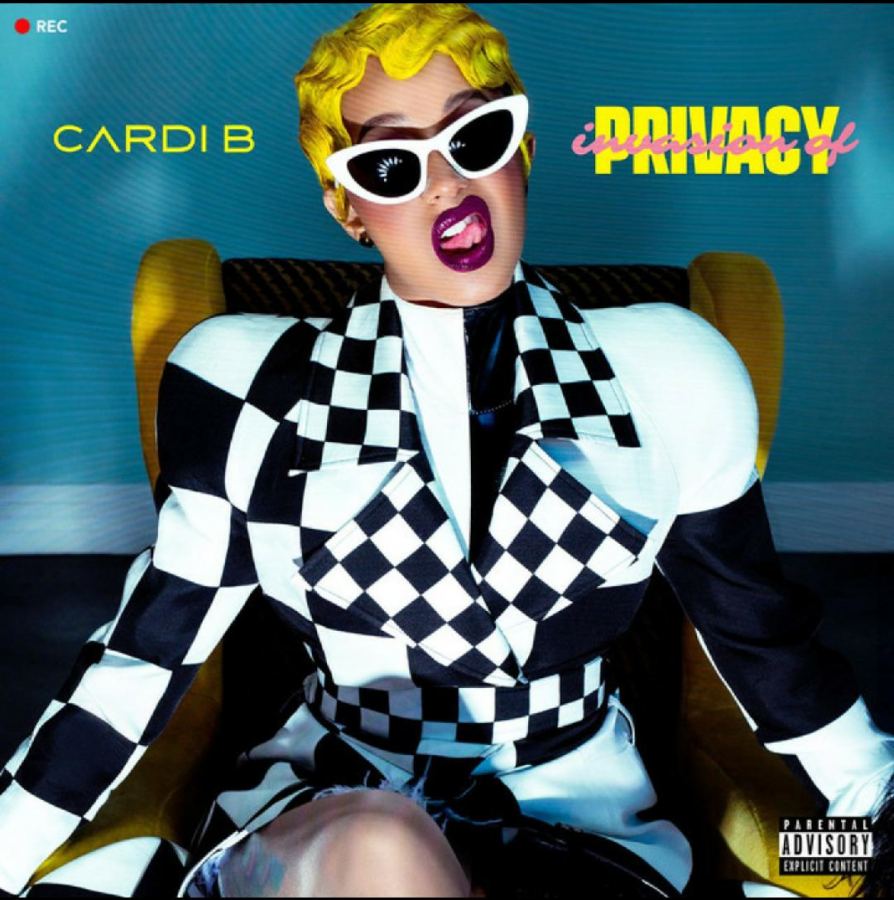 “Invasion of Privacy” is an appropriate title as the album is a curation of Cardi B’s personality, authentic and raw, intimate story telling of her success, being a former stripper, and confronting a cheating scandal in front of the world.

The album sets the tone with “Get Up 10,” a track that is similar to Meek Mill’s “Dreams and Nightmares,” starting off with slow instrumental beat as a platform for her intimate yet inspirational storytelling, transitioning into a stronger beat with an aggressive attitude describing her personal life struggles and journey so far “We gone win, knock me down 9 times but I get up 10.”

At just 25, Cardi B’s work ethic was introduced as she was already on the scene with her three previous mixtapes, but it wasn’t until her single “Bodak Yellow” that took her to the top of the charts and gave her the notoriety she wanted as an artist in the industry.

The two time Grammy nominated song was up for both categories in best rap song and the best rap performance for the trap rapper.

Cardi B wanted her presence known and to be felt on and off the stage and this song offers just that, from the first second, the beat captivates you, which is produced by J. White, who is known for working a few notable artists such as Plies and 2 Chainz.

There is an undeniable expression and potent energy spewing from Cardi that can be felt as she takes you out of your element and paints the picture of her world to where there is no containing rapping along to the lyrics of “Bodak Yellow.”

“little B—- you can’t f— with me if you wanted to, these expensive these is red bottoms these is bloody shoes.” “I don’t dance now I make money moves” “I’m the hottest in the streets I know you prolly heard of me /I  got a bag and fixed my teeth hope you hoes know it ain’t cheap”.

Throughout the speculation of Cardi writing “Be Careful” in response to alleged cheating rumors with fiancé Offset from the Migos, Cardi credits Pardison Fontaine at her listening party for being the ghost writer to the song and she flipped into the girl version. She explained when she heard the song she liked it and wanted to make it her own female version “Do you know what you doing, whose feelings that you hurt and bruising.”

However, there is a track titled “Thru Your Phone” where she is also displaying her hidden talent of signing on the chorus and describing a relationship where cheating and infidelity is involved. Lyrics like “F— your little fake ass friends, coming around acting like they my bros, I seen your little group text where you like to brag about your hoes,” showcase her feelings about backstabbing and cheating.

That verse may very well may be a subliminal message to Offset and the Migos, but there is no beef as they made a guest appearance on “Drip” which is anticipated to be another trap banger.

The regular, degular, shmegualr Bronx native has shown her vulnerable side sharing many private affairs from her life in her debut album. Cardi B was able to create an album that resonates to many of us through her music and captivated many hearts through her quirky personality but she definitely served us with some music to enjoy.