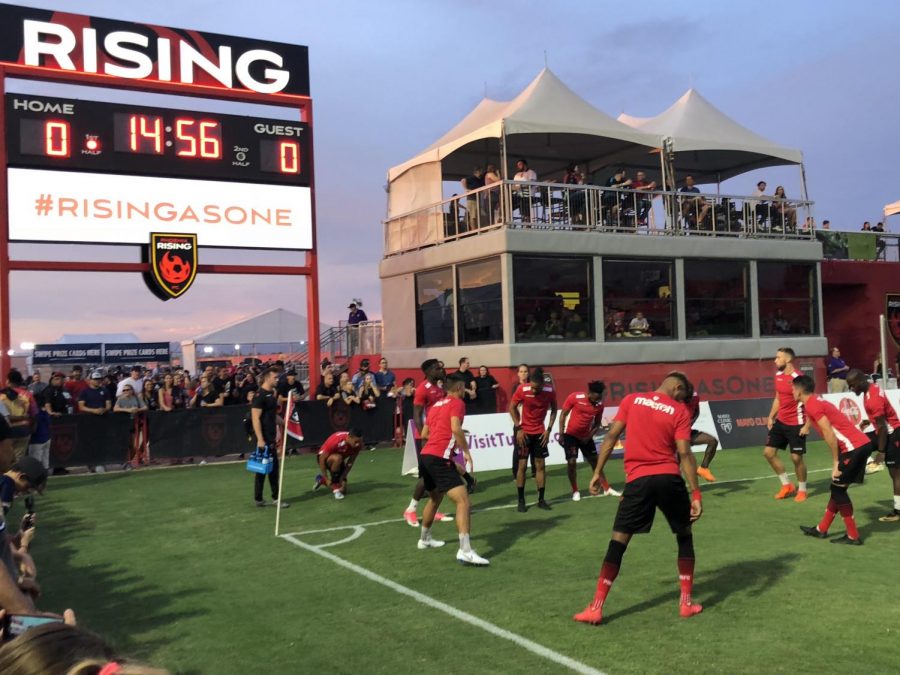 The 5th place Phoenix Rising Football Club returned to their winning ways after a 1-0 victory over 17th place Seattle Sounders FC II on Friday in Tempe.

Another record attendance of 7,381 was on hand despite the record heat that the players, coaches and fans endured in the 90-minute match.

The first half left much to be desired as both teams struggled to get a handle on the game or assert dominance.

The first shot of the game came after 11 minutes in when Rising forward, Chris Cortez, saw his header from a corner go over the crossbar.

Physicality played a big part in the first half, as the referee allowed play to go on without issuing any yellow cards. The first half finished with a total of four shots, no shots on target, and only one corner.

Phoenix Rising FC was the clear aggressor in the second half.

Within the first ten minutes, the Rising had plenty of chances, including Jason Johnson’s one-on-one opportunity that was saved by Seattle Sounders FC II’s goalkeeper, Calle Brown.

But it wasn’t until 56 minutes in that Chris Cortez finally found the back of the net after a long ball from James Musa saw Cortez in on goal for a lovely chip over the keeper to give the Rising a 1-0 lead.

Cortez’s goal proved enough for the Rising to capture all three points.

“It was just a long ball clearance,” said Cortez after the game. “I was just trying to be in a spot to be an outlet. The defender came in and I was able to win the flick on. My momentum was carrying me toward the goal, the keeper was trying to come out, so he made the decision for me to go over him. Then it’s all about getting it over and on frame.”

“We talked about it all week,” said Rising manager, Rick Schantz, regarding his team’s bounce-back performance following last week’s 4-0 loss to Fresno. “I didn’t care how we got the three points, but there was no other result that I was going to accept. I don’t think we played particularly well, but championship teams don’t play well and win 1-0. That’s going to be the key point in this game.”

The lone goal was not for a lack of trying.

In addition to the goal, the victory came because the Rising defence didn’t allow a single shot on target all game.

“We were really able to limit their chances,” said Rising goalkeeper, Carl Woszczynski regarding his team’s defensive performance. “I didn’t really touch the ball much the whole game. Kudos to my defence. We finished the chance we got. Take a 1-0 win and move on.”

The Rising will look to close the gap atop the western conference standings, as the team travels to Salt Lake City for a clash with Real Monarchs on Saturday, July 28.